VATICAN INSIDER AND THE CAUSE OF VENERABLE FULTON SHEEN

Welcome to “Vatican Insider” on this final weekend of July! Where has this month gone!
As you know, I start the program with a summary of the news highlights of the past week at the Vatican, usually followed by a Q&A when time allows.
This week, I urge you to stay tuned after the news segment of Vatican Insider for Part II of my conversation with Msgr. Richard Soseman of the diocese of Peoria in Illinois. He is the vice postulator for the cause for canonization of Venerable Servant of God Archbishop Fulton Sheen. You won’t want to miss this! 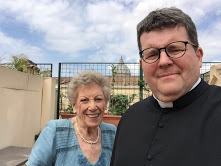 Msgr. Soseman noted that, at a July 5 audience with Cardinal Angelo Becciu, prefect of the Congregation for the Causes of Saints, Pope Francis announced that a miracle attributed to the intercession of Archbishop Sheen could be promulgated, thus moving him a step closer to beatification.

Thus, said the vice postulator for the Sheen cause for canonization, a second miracle for the canonization of Abp. Sheen must occur after that July 5 date.

He also told me – thus the listeners of Vatican Insider – that if anyone knows of an alleged miracle due to the intercession of Abp, Sheen, they should contact him by writing to: Msgr. Richard Soseman, 1109 Pulaski Street, Peru, Illinois 61354.

By the way, in many cases, including Pope John Paul II and Abp. Sheen, miracles have been reported to have occurred during the person’s lifetime. However, even though well documented and meeting all criteria for a miracle, they may not be used toward the cause of canonization for a person.

And here’s a link to the story about the miracle that led to Sheen’s beatification: https://churchpop.com/2019/07/06/that-miracle-thats-getting-ven-archbishop-fulton-j-sheen-beatified/

One last point: If you know of someone who is very ill – man, woman or child – and in need of prayers, why not start praying to Abp. Sheen today to intercede for that person? And why not ask that person’s family member and friends to also pray to Venerable Sheen!

IN THE UNITED STATES, you can listen to Vatican Insider (VI) on a Catholic radio station near you (stations listed at http://www.ewtn.com) or on channel 130 Sirius-XM satellite radio, or on http://www.ewtn.com. OUTSIDE THE U.S., you can listen to EWTN radio on our website home page by clicking on the right side where you see “LISTEN TO EWTN.” VI airs at 5am and 9pm ET on Saturdays and 6am ET on Sundays. On the GB-IE feed (which is on SKY in the UK and Ireland), VI airs at 5:30am, 12 noon and 10pm CET on Sundays. Both of these feeds are also available on the EWTN app and on http://www.ewtnradio.net ALWAYS CHECK YOUR OWN TIME ZONE! For VI archives: http://www.ewtn.com/multimedia/audio-library/index.asp (write Vatican Insider where it says Search Shows and Episodes)

VATICAN INSIDER: KATE MAHONEY, HER MIRACULOUS CURE AND A BEATIFICATION

My guest this weekend in the interview segment of Vatican Insider is Kate Mahoney whose miraculous cure of multiple organ failure following treatment for cancer was credited to the intercession of Servant of God Mother Marianne Cope and this led to Marianne’s beatification in 2005. Kate tells an amazing – and extremely inspiring! – story so be sure to pour that extra cup of coffee as you listen to her tale.

Here is a photo I took of Kate as she met Audrey Toguchi, another “miracolata” as we call her in Rome, whose cure of lung cancer was attributed to Blessed Damien of Molokai, a miracle that led to his canpnization in 2009. The two met for the first time at the Damien and Marianne Catholic Conference that I attended last weekend in Honolulu. The second photo also shows Bishop Larry Silva of Honolulu.

They both gave wonderful talks about their cures and answered questions for those attending this session.

Kate has written a book about her journey through illness to her pilgrimage to Rome for Mother Marianne’s beatification.

In the United States, you can listen to Vatican Insider (VI) on a Catholic radio station near you (there is a list of U.S. stations at www.ewtn.com) or on channel 130 Sirius-XM satellite radio. Outside the U.S., you can listen to EWTN radio on our website home page by clicking on the right side where you see “LISTEN TO EWTN.” Vatican Insider airs Saturday mornings at 9:00am (ET). On the SKY satellite feed to the UK and parts of Europe, VI airs on audio channel 0147 at 11:30 am CET on Saturdays, and 5:30am and 10pm CET on Sundays. It’s also available on demand on the EWTN app and on the website. CHECK YOUR TIME ZONE. Here’s a link to download VI to your iTunes library: http://www.ewtn.com/se/pg/DatService.svc/feed/~LE.xml   For VI archives: http://www.ewtn.com/vondemand/audio/file_index.asp?SeriesId=7096&pgnu=

ROME (CNS) — Pope Francis said that there are no easy answers to the suffering and destruction wrought by hurricanes and that while such disasters happen naturally, humankind must also take responsibility for not caring for the environment.

In a video chat with young children participating in a program of the international network of “Scholas Occurrentes” Oct. 26, the pope spoke with children from Texas and Puerto Rico, where Hurricanes Harvey and Maria struck hardest.

“If God loves us all, why did he make hurricanes and heavy rains?” asked Pedro Garcia, a 9-year-old Mexican-American boy living in Houston who lost his home after Hurricane Harvey struck Texas.

Galveston-Houston Catholic school students smile for a photo before a live video chat with Pope Francis at Telemundo Houston Oct. 26. In a video chat with young children from Texas and Puerto Rico, the pope said there are no easy answers to the suffering and destruction wrought by hurricanes. (CNS photo/James Ramos, Texas Catholic Herald)

(from EWTN’s ChurchPOP) –  The Las Vegas shooting on October 1st, 2017 was the deadliest shooting in modern American history, leaving 58 people dead and over 500 people injured.

About two weeks later, Fr. Clete Kiley from Chicago arrived in Las Vegas with a group meant to help and comfort the traumatized staff of the Mandalay Bay Hotel, from where the killer had opened fire on the concert crowd outside.

He had just finished leading prayer with several hundred members of the hotel staff when the hotel manager approached him. She explained that the shooter’s room had just been released back to the hotel by the FBI, and she wanted him to perform a blessing in the space.

As soon as he set foot in the hallway of the 32nd floor where the room was, he says he immediately felt a dark spiritual presence.

“I felt like I was being pushed back, like ‘don’t come in here’,”he told Newsweek. But he pushed on anyway: “On the inside, I’m going, ‘Oh no, you have to go’.” So he started praying the Prayer to St. Michael.

“When I stepped in the room, I really felt a real profound silence,” he later explained. “I immediately noticed the broken windows covered from outside. It was very powerful to see the physical damage.”

He could sense an evil presence in the room, so he used a palm branch to disperse Holy Water while praying to the Holy Spirit.

Right away, he could feel a sense of comfort and relief. When he returned back downstairs, the hotel staff was also relieved that a Catholic priest had blessed the room.

I wonder how many photographers have had a privilege like the one I had at dinner tonight! I attended Cardinal Stanislaw Dziwisz’ Mass of thanksgiving this evening for Poland’s newest Saint Stanislaus Papczyński in the basilica of Santa Maria in Trastevere. Dinner for about 350 of the pilgrims in Rome for this canonization was provided at three restaurants near the basilica. We all had color-coded tickets for the restaurants.

My green ticket brought me to Tonnarello where I dined with two American priests whom I had previously met, Fr. Jerry McCarthy and Fr. Fred Bernardini, and many pilgrims including – and I only found this out later –  the families of the two people whose miracle cures led to both the beatification and canonization of Saint Stanislaus!.

After dinner Fr. Pakula, the Marian Fathers Prior General, arranged a group photo of the two families! I was extraordinarily privileged to shared this very special moment with Marie Romagnano of Med-Link, Inc. who is a Marian Fathers’ devotee whom you’ve seen on EWTN (she has a photography hobby) and several Polish photographers who had come to Rome for the canonization.

It is late but I do want to post this amazing photo. I’ll tell the stories of the miracolati later. (I do not know how to make the photo larger – will try to learn)

In this photo, the young blonde woman in the front row was the miracle for the beatification – her husband is in the back holding the youngest of their two children. Their first-born is the little boy in the front who is not looking at the camera.

The young lad to the left of Fr. Pakula’s left shoulder, the boy smiling broadly, is the miracle man for yesterday’s canonization. His younger brother is also in the front row.

One of the absolutely most astonishing things about both stories, about both people, about both cures is that the miracolati as they are called in Italian, are from the same parish in Poland!!