I received an email today from the Pauline multimedia store in Rome: “We would like to inform you that the new book written by Cardinal Sarah with the contribution of Pope Benedict XVI, ‘From the Depths of Our Hearts,’ is available for pre-order now.”

I presume that refers to the English-language edition of the book. This seems to answer in part the question of who authored the book, although Benedict XVI is not referred to as “Pope emeritus.”

I also received great news about a friend in the Vatican’s Secretariat of State!

(Vatican News) – Pope Francis has appointed Dr. Francesca Di Giovanni, currently an official of the Secretariat of State, as under-secretary for the Section for Relations with States. She will be responsible for the multilateral sector. 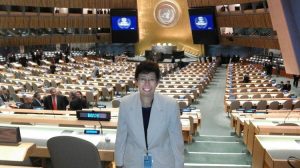 Born in Palermo in 1953, Dr. Di Giovanni has worked in the Secretariat for 27 years and holds a law degree. After completing practicum as a notary, she worked in the juridical-administrative area at the International Centre of the Work of Mary (Focolare Movement). On 15 September 1993 she began work as an official in the Section for Relations with States of the Secretariat of State. Di Giovanni has served in the multilateral sector, especially in the areas of migrants and refugees, international humanitarian law, communications, private international law, the status of women, intellectual property, and tourism.

With the appointment of Dr. Di Giovanni, the Section for Relations with States has two under-secretaries: Di Giovanni will work alongside Monsignor Mirosław Wachowski, who will continue to work primarily in the area of bilateral diplomacy.

Were you surprised by the appointment as under-secretary?
Yes, absolutely! For several years now we have been thinking about the need for an under-secretary for the multilateral sector: a delicate and demanding sector that needs special attention, because it has its own procedures, in some ways different from those of the bilateral sphere. But I sincerely never would have thought the Holy Father would have entrusted this role to me.

It is a new role and I will try to do my best to live up to the Holy Father’s trust, but I hope not to do it alone: I would like to count on the harmony that has characterized our working group so far.

What exactly is the “multilateral sector”?
Simply speaking, you can say that it deals with relations between inter-governmental organisations at the international level and includes the network of multilateral treaties, which are important because they embody the political will of States with regard to the various issues concerning the international common good: this includes development, the environment, the protection of victims of conflicts, the situation of women, and so on.

What does your work consist of?
I will continue to deal with what I have been following up to now in the Section for Relations with States, although in this new role, I shall be responsible for coordinating the work in this area.

You are the first woman to hold a position at this level in the Secretariat of State…
Yes, actually, it’s the first time a woman has had a managerial position in the Secretariat of State. The Holy Father has made an unprecedented decision, certainly, which, beyond myself personally, represents an indication of an attention towards women. But the responsibility is connected to the job, rather than to the fact of being a woman.

In your opinion, what can the specific contribution be of a woman in this field?
I cannot fail to recall the words of the Holy Father in his homily on 1 January, in which he presented — we could say — a “tribute” to the role of women, saying that, “women are givers and mediators of peace and should be fully included in decision-making processes. Because when women can share their gifts, the world finds itself more united, more peaceful”.

I would like to be able to contribute to the realization of the Holy Father’s vision, with my other colleagues who work in this area of the Secretariat of State, but also with other women — and there are many of them — who are working to build fraternity in this international dimension too. It is important to emphasize the Pope’s attention to the multilateral sector, questioned today by some, but which has a fundamental function in the international community.

A woman may have certain aptitudes for finding commonalities, healing relationships with unity at heart. I hope that my being a woman might reflect itself positively in this task, even if they are gifts that I certainly find in my male colleagues as well.

In his recent address to the Diplomatic Corps, the Pope spoke about the multilateral system, calling for its reform…
In the international community, the Holy See also has the mission of ensuring that the interdependence between people and nations be developed in a moral and ethical dimension, as well as in the other dimensions and various aspects that relations are acquiring in today’s world. One must never tire of encouraging dialogue at all levels, always seeking diplomatic solutions.

For example, in his recent speech to the Diplomatic Corps, the Pope recalled, among other things, the many positive results of the United Nations, which celebrates its 75th anniversary this year. We want to continue seeing the UN as a necessary means for achieving the common good, even if this does not exempt us from asking for changes or reforms where deemed necessary.

POPE FRANCIS ENDS CATECHESIS ON ACTS OF THE APOSTLES

Today’s general audience began about 9:15 in the Paul VI Hall as an enthusiastic crowd of pilgrims greeted the Holy Father. After shaking hands and waving to people, Francis settled into the papal chair and began his audience catechesis by announcing he was concluding his months-long series on the Acts of the Apostles

“Dear Brothers and Sisters,” he began. “Today we conclude our catechesis on the Acts of the Apostles with Paul’s arrival in Rome, in chains, to appeal his case to Caesar. As we have seen, Saint Luke’s account of the spread of the Gospel largely coincides with Paul’s missionary journeys.”

He noted that, “In Rome, Paul is welcomed by the Christian community and permitted to remain under house arrest. Luke ends the Book of Acts not with Paul’s martyrdom but by describing his tireless proclamation of the Gospel, showing the power of God’s word that can never be chained. Paul’s missionary journeys, culminating in this city, reveal the power of God’s grace to open hearts to the Gospel and its saving message.”

“Having in these past months followed the spread of the Good News throughout the world,” concluded Francis, “let us ask the Holy Spirit to renew in each one of us the call to be courageous and joyful missionary disciples of Christ. In this way, we – in the footsteps of Paul – will fill our world with the Gospel and make our communities places of fraternity where all can encounter the risen Lord.

The Pope then greeted the English-speaking pilgrims and visitors taking part in today’s audience,”especially the groups from Finland and the United States of America. Upon you and your families, I invoke the joy and peace of our Lord Jesus Christ. May God bless you!”

Later, he spoke to a group after the catechesis was summarized in Arabic: “I cordially welcome the Arabic-speaking pilgrims, especially those from the Middle East! Dear brothers and sisters, the joy of the Gospel comes from the encounter with Jesus. It is when we meet the Lord that we are flooded with that love of which he alone is capable, and therein lies the source of evangelizing action. So let us not be afraid of making mistakes and fear of taking new paths, because our poverty is not an obstacle, but a precious tool, because the grace of God loves to manifest himself in weakness. The Lord bless you!”