Here is an interesting post on the 10 most Catholic countries in the world – photos and some stats – enjoy! https://aleteia.org/2019/01/18/the-top-10-most-catholic-countries-in-the-world/?utm_campaign=NL_en&utm_source=daily_newsletter&utm_medium=mail&utm_content=NL_en

WEEK OF PRAYER FOR CHRISTIAN UNITY AT THE HEART OF ECUMENISM

Pope Francis and other Christian leaders on Friday inaugurate the annual Week of Prayer for Christian Unity with the celebration of evening Vespers in the Basilica of St. Paul Outside the Walls.
By Linda Bordoni (vaticannews)

The joint celebration that kicks off the Week of Prayer for Christian Unity is a powerful symbol of unity and of the recognition that Christian denominations are on the path to unity and getting closer in doctrine.

The Week of Prayer, traditionally observed from January 18 to 25, unfolds this year on the theme “Justice, and only justice, you shall pursue” inspired by Deuteronomy.

Pope Francis looked ahead to the Week of Prayer during the Wednesday general audience, saying that, “Again, this year we are called to pray so that all Christians may once again be a single family, according to God’s will ‘so that they may all be one’.”

He pointed out that “ecumenism is not something optional” and said it aims “to develop a common and consistent witness that promotes true justice and support for the weakest through responses that are concrete, appropriate and effective”

Participating in Vespers at St. Paul’s Outside the Walls are also many faith-based groups that have made ecumenism an important part of their mission. Amongst them, the Ecumenical Institute of Bossey, with 29 students from across the Christian spectrum and from across the globe.

Daniel Reffner, a United Methodist candidate for the ordained ministry from the United States, speaks to Linda Bordoni about his experience studying ecumenism at Bossey and about how it has changed his perspective:

To both read and listen to that interview, click here:
https://www.vaticannews.va/en/church/news/2019-01/week-prayer-christian-unity-bossey-daniel-reffner.html

In a telegram sent on his behalf by Cardinal Secretary of State Pietro Parolin to Cardinal Rubén Salazar Gómez, Archbishop emeritus of Bogotá, Pope Francis has sent his condolences for the victims of the terrorist attack that occurred yesterday:

“In the face of the news of the cruel terrorist attack that has sown pain and death in the city of Bogotá, Pope Francis expresses his deepest sorrow for the victims who have lost their lives in an inhuman action, and he offers prayers for the eternal repose of their souls. In these moments of great emotion and sadness, he wants to also send his support and closeness to the numerous wounded, to the families and to all of Colombian society.

“The Holy Father once again condemns blind violence, which is a serious offense to the Creator, and raises his prayers to the Lord that He may help people to persevere in building harmony and peace in that country and in the whole world.

“With these wishes, His Holiness invokes on all the victims, their families and the beloved people of Colombia, the Apostolic Blessing.”

Before I go to the report about the five new cardinals named today by Pope Francis, I have another piece of news about a late cardinal known by many of us who worked in the Roman Curia when he headed a pontifical council: The mortal remains of Cardinal Alfonso Lopez Trujillo, former president of the Pontifical Council for the Family and archbishop emeritus of Medellín, Colombia, who died in Rome nine years ago, were transferred to Colombia, the country of his birth, at the request of Pope Francis to the Pontifical Commission for Latin America. The cardinal’s body arrived on Monday May 15, 2017. Archbishop Ricardo Tobon Restrepo of Medellín celebrated the liturgical ceremony of the reception of the body. The late cardinal was buried in the Crypt of the Archbishops in the metropolitan cathedral.

In a surprise announcement after praying the Regina Coeli this afternoon, Pope Francis said he would hold a consistory to create new cardinals on June 28, naming five bishops and archbishops from Mali, Laos, Sweden, Spain and El Salvador, once again going to the “periphery” as well as to lands where Catholics are a minority,

With the five new cardinals, the College of Cardinals will total 227, 121 of whom are cardinal electors, that is, under the age of 80 and eligible to vote in a conclave.

A CNA/EWTN report by Elise Harris notes that, during his Regina Coeli address Sunday, Pope Francis announced to pilgrims that he will be holding a June 28 consistory to create 5 new cardinals he said represent the “catholicity” of the Church.

“Brothers and sisters, I wish to announce to you that Wednesday, June 28, I will hold a consistory for the nomination of 5 new cardinals,” the Pope said May 21, adding that “their origin from different parts of the world manifests the catholicity of the Church, spread throughout the earth.”

The day after the consistory, on the June 29 Solemnity of Sts. Peter and Paul, the new cardinals will concelebrate Mass with Pope Francis in St. Peters Basilica alongside the new metropolitan archbishops named during the previous year, who traditionally receive the pallium from the Pope on that day.

True to Francis’ style, the new appointments represent not only the weight key European dioceses such as Stockholm carry, but also the Pope’s acute attention to the peripheries.

A key example of this is the appointment of a cardinal to communist Laos. In 2015 Pope Francis advanced the causes of canonization of 12 potential saints, two of whom were martyred by communist revolutionaries in Laos in 1960.

The Pathet Lao defeated the royalist forces in 1975, and Laos has been a communist state ever since. Foreign missionaries were expelled or fled that year, and now fewer than two percent of Laotians are Christian.

Also noteworthy is his appointment of San Salvador’s auxiliary bishop, marking the first time he has tapped an auxiliary as cardinal. Bishop Chávez was chosen over his Archbishop, Jose Luis Escobar Alas, for the red hat, showing that Francis, as seen in his previous appointments, is willing to skip over “cardinal sees.”

San Salvador is also the diocese Bl. Oscar Romero led before being shot during Mass in 1980. He was recognized as a martyr and beatified in 2015. Chávez is known to have been a close collaborator of Romero before the archbishop’s death.

Rumors have been going around that Romero will be canonized sometime this year, however, so far there has been no confirmation.

All of the new cardinals are under 80, and therefore eligible to vote in the next conclave.

Pope Francis tweeted today: Forgiveness is the most visible sign of the Father’s love, which Jesus sought to reveal by his entire life.

My special guest this week on Vatican Insider is George Weigel, Distinguished Senior Fellow at the Ethics and Public Policy Center in Washington, D.C. and prolific author, including “Witness to Hope,” the biography of Pope John Paul II. George recently gave a lecture at the North American College entitled “Catholics in the New America: The Evangelical Challenge After Election 2016” – a fascinating topic and you’ll want to stay tun

As you know, in the United States, you can listen to Vatican Insider (VI) on a Catholic radio station near you (there is a list of U.S. stations at www.ewtn.com) or on channel 130 Sirius-XM satellite radio. If you live outside the U.S., you can listen to EWTN radio on our website home page by clicking on the right side where you see “LISTEN TO EWTN.” Vatican Insider airs Saturday mornings at 9:00am (ET). On the SKY satellite feed to the UK and parts of Europe, VI airs on audio channel 0147 at 11:30 am CET on Saturdays, and 5:30am and 10pm CET on Sundays. It’s also available on demand on the EWTN app and on the website. CHECK YOUR TIME ZONE. Here is a link to VI archives: http://www.ewtn.com/vondemand/audio/file_index.asp?SeriesId=7096&pgnu=

And a link to automatically download VI to your iTunes library: http://www.ewtn.com/se/pg/DatService.svc/feed/~LE.xml

This morning in the Vatican Apostolic Palace, the Holy Father Frances received in audience President Juan Manuel Santos Calderón of the Republic of Colombia, who subsequently met with Cardinal Secretary of State Pietro Parolin, accompanied by Archbishop Paul Richard Gallagher, secretary for Relations with States. 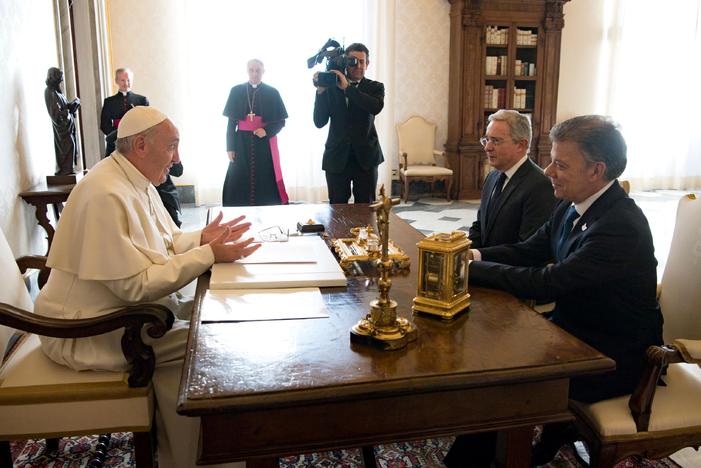 The discussions took place in an atmosphere of great cordiality, confirming the existing good relations between the Holy See and Colombia. Appreciation was expressed for the Pope’s support during the peace process, along with the hope that such peace will be stable and lasting. In this regard, the parties highlighted the importance of encounter and unity between the Colombian political parties and the commitment of FARC-EP, while the local Church will be able to offer her contribution in favour of national reconciliation and education in forgiveness and harmony. Some issues relating to regional current affairs were then addressed.

The Holy Father went on to meet His Excellency Senator Álvaro Uribe Vélez, first in private audience and then together with President Santos. The Pope spoke about the “culture of encounter” and emphasized the importance of sincere dialogue between all members of Colombian society at this historical moment (Holy See Press Office).

A TSUNAMI OF WISHES FOR POPE FRANCIS 80TH BIRTHDAY

(Vatican Radio) Birthday wishes have been pouring in from across the globe in celebration of Pope Francis’ 80th on Saturday, 17 December.

Among those toasting the Pope in an especially ‘personal’ way, are the impoverished residents of the villas miserias – or shanty towns – in Buenos Aires who always looked to the then Archbishop of Buenos Aires, Jorge Bergoglio, as their pastor.

Francis’ ‘right-hand-man’ in the field was Father ‘Pepe’ Di Paola, who continues to carry out his mission with the poorest of the poor in Argentina’s capital city. He spoke by telephone to Vatican Radio about Jorge Bergoglio and ‘his’ people.

First of all, Father Pepe says, I would like to wish Pope Francis the possibility of continuing to pursue his priestly vocation in solidarity and in communion with the poor and in deep union with the Church and the Gospel.

“May he go ahead in his mission to walk in the spirit of the Gospel which is what the Church is in need of” he says.

As for his birthday, Father Pepe reveals, Francis does not particularly like being made a fuss of. For example, he says, when the children and young people here in our vocational school used to make gifts for him, they knew he would give them away… but that was ok! It’s not that he didn’t appreciate the gift, what was important for him was that it was made by the children themselves and that they would want to be with him.

And exactly because they know him, Father Pepe says, what the poor people here in Argentina are doing for his birthday is praying for him. Because they love him very much.