Pope Francis decries a shooting in which six people were killed and over 30 injured at a Fourth of July parade in the northern Chicago suburb of Highland Park.

Pope Francis has decried the tragic shootings that killed six and wounded some 30 others during a Fourth of July parade in the Chicago suburb of Highland Park on Monday, appealing for a rejection of all forms of violence, and a respect for life at all its stages.

The Holy Father did so in a telegram sent to the archbishop of Chicago, Cardinal Blase Cupich. In the telegram, sent on the Pope’s behalf by Vatican Secretary of State, Cardinal Pietro Parolin, he said he was “deeply saddened” to learn “of the senseless shooting” that took place in the U.S., and asked the cardinal to convey his spiritual closeness to all affected by this attack. 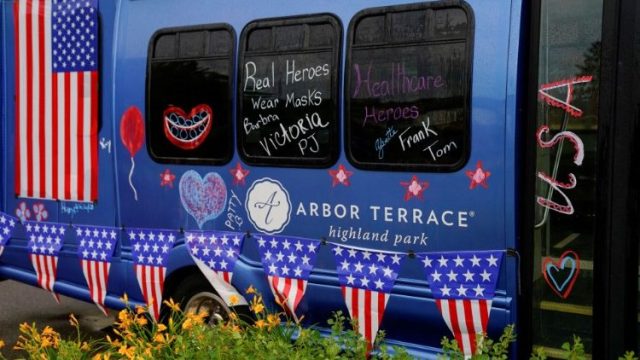 The Pope said he “joins the entire community in praying that Almighty God will grant eternal rest to the dead and healing and consolation to the injured and bereaved.”

“With unwavering faith that the grace of God is able to convert even the hardest of hearts, making it possible to depart from evil and do good,” Pope Francis prayed “that every member of society will reject violence in all of its forms and respect life in all of its stages.”

Pope Francis concluded, by sending his Apostolic Blessing “as a pledge of strength and peace in the Lord.”

On Monday, a gunman on a rooftop opened fire on an Independence Day parade in the affluent northern Chicago suburb killing at least six people and wounding at least 30 others.

Police identified Robert E. Crimo III as a person of interest in the shooting and, after an hours-long manhunt, the suspect was taken into police custody.

The July 4 shooting marks the latest tragic shooting in the country, and takes place in the light of hundreds of others during 2022 that have plagued schools, churches, grocery stores and now community parades.

May 13, a remarkable day in history –

Today, we mark the anniversary of the first apparition of Our Lady at Fatima on May 13, 1917 to the three small shepherd children, Lucia, Francisco and Jacinta.

Also, it was 38 years ago today that John Paul II was shot in St. Peter’s Square!

WHERE WERE YOU 38 YEARS AGO TODAY?

I was on my way to St. Peter’s Square for the 5:00 pm general audience that Pope John Paul had just begun to preside. The weather had been very warm and the Vatican had moved the audiences from the hot noonday sun to a later time in the afternoon.

As I walked towards the square after having coffee in a small coffee bar nearby, I saw a group of Italian students, perhaps 30 of them, perhaps 10-years old, walking away from St. Peter’s Square with their teachers. They were not running so there was no reason to worry and I didn’t give them a second thought, except to wonder why they were leaving the papal audience, instead of attending it.

And then I heard a scream! A voice shouted in Italian, “they’ve shot the Pope.” My mind could not process those words together. My feet seemed nailed to the sidewalk, I was momentarily paralyzed – it may have been five seconds or less but I couldn’t move! When I finally absorbed the shock, I ran towards St. Peter’s Square where people were not quietly listening to what should have been a papal catechesis, rather they were going in all directions, asking each other what they heard, asking each other what they had seen. There were a lot of tears, so many people holding their heads, shaking their heads in disbelief, but always the tears.

My mind still could not conceive the words “they’ve shot the Pope.” It was unbelievable, unimaginable. Who in their right mind would want to shoot a man of such magnificent spirituality, such great teaching, such wisdom and humanity and humor, a man whose entire life was a life of prayer, of service, of dedication, of singular love for his Church love for his people, for all people.

Where was that life now – 5:30 in the afternoon of Wednesday, May 13? Had it ended? Was it hanging in the balance? Was it possible to go from joy to sorrow in only a nanosecond?

As I was running towards the square to see what had happened, one of the more amazing things happened.

I had entered St. Peter’s Square and, walking around, had asked in as many languages as I knew what people had heard and what they had seen. At a certain point, a very tall American priest, with an obviously worried expression on his face, came up and asked me if I knew the whereabouts of the two women in his pilgrimage group who had been shot along with Pope John Paul!

Naturally, I was absolutely floored and asked him their names and if he thought they had been taken to a hospital. To this day, 38 years later, I remember those names: Ann Odre was a senior citizen in Father’s group and Rose Hall was the wife of a military man who had just come from – or was perhaps going to – Germany to see him. I made inquiries and found that both women had been taken to the nearby Santo Spirito hospital where, a day or two later, I visited Ann Odre.

John Paul of course became the focus of everyone’s attention: the faithful in the square, the people of Rome whose bishop had just been shot and, thanks to the media, people around the world. As a member of the media, I ran back to the press office to tell my colleagues what I had learned. I worked for a weekly newspaper in Rome at the time – the International Daily American – and also wrote a weekly column for the National Catholic Register as the Rome bureau chief. Working for a weekly it was tough to have a scoop but what I had discovered in the square, especially the information about the two American women, had to be shared with all of my fellow journalists.

For hours we were on the phone. We all called our contacts to ask who might have been in the square, what they saw, what they heard. Bit by bit, information was pieced together. We learned that a man with a gun, had raised it, pointed it at the Pope and fired shots and was immediately wrestled to the ground by a nun. The man, we later discovered, was a Turkish citizen named Ali Agca who was immediately taken into custody.

No one even thought of leaving the press office: Throughout the evening, and into the first hours of the new day, we all had our eyes on the television sets in the press office. There was nothing at that time like today’s social media – no Internet, Twitter, Facebook, Youtube and videos made with cell phones (no cell phones at that time, either!), iPads, etc., so we relied on our land line phones and Italian television.

It was an amazing evening. The hours dragged on and on, restaurants closed and yet no one had had dinner. At best, some colleagues went to a few coffee bars before they closed to get a sandwich and some coffee for what we knew would be a long night. We all knew that no matter what we were writing, the final story line could not be written until we heard from the Gemelli hospital if the Pope had survived his surgery or if indeed a final line have been written in the life of Pope John Paul.

Given God’s great love – and surely his Mother Mary’s love as well – for this special man, given Pope John Paul’s belief in Divine Mercy and his unshakeable belief in Divine Providence, we all received the gift of a Pope who survived and a long papacy, following this potentially fatal day.

I got to bed in the wee small hours of the morning after dictating my story on the phone to the Register, based at the time in Los Angeles. I was exhausted when I went to bed and only slept a few hours because all of us were anxious to return to work the next morning and find out what had happened to the Pope overnight.

You all know the rest of the story: Pope John Paul survived, had a long recovery period and eventually had other surgeries: There would be another 24 years of a fruitful pontificate by a traveling Pope, a Pope who wrote documents and poetry, a Pope who influenced the lives of hundreds of millions of people.

As I write these words 38 years later, that Pope is now Saint John Paul II.

Now, do you remember where you were 38 years ago today, May 13, 1981, feast of Our Lady of Fatima, the gentle lady whose loving hand, as John Paul said, deflected the bullet that could have killed him?

I met the Holy Father many times over the years and have an album of photos and a bigger album of memories.