As a follow-up to my reports from Hawaii on Servant of God Joseph Dutton, I’ve received several requests from people asking if there are books on or by Joseph Dutton. Certainly one of the most interesting are Dutton’s own memoirs and you can find that book on the Dutton Guild website: Dutton Memoirs Book | Joseph Dutton Guild     Enjoy!

Following is a summary of today’s general audience catechesis. Click here for some great photos of the gathering: General Audience – Activities of the Holy Father Pope Francis | Vatican.va

POPE FRANCIS ON HOW “DESOLATION” IS PART OF DISCERNMENT

The Holy Father began this week’s general audience by noting that, “in our continuing catechesis on discernment, we have seen the importance of interpreting the movements of our heart, including occasional experiences of ‘desolation’ or interior unrest and dissatisfaction. Such moments are in fact a challenge to our complacency and an incentive to growth in the spiritual life.”

In fact, says Pope Francis, “we have seen how important it is to read what stirs within us, so as not to make hasty decisions, spurred by the emotion of the moment, only to regret them when it is too late. That is, to read what happens and then make decisions.”

Addressing the thousands of pilgrims in St. Peter’s Square, he said, “we cannot ignore our feelings: we are human and sentiment is a part of our humanity. And without understanding feelings we are inhuman; without living our sentiments we will also be indifferent to the sufferings of others and incapable of accepting our own.” (Vatican photo) 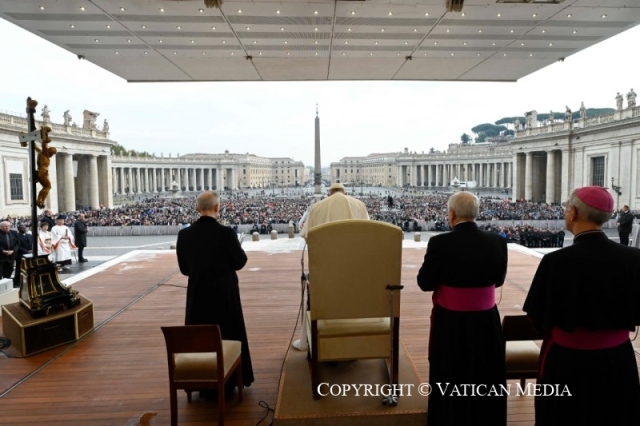 “Not to mention,” Francis continued, that such a ‘perfect serenity’ cannot be reached by this path of indifference. This sterile distance: ‘I won’t get involved in things, I will keep my distance’: this is not life, it is as though we lived in a laboratory, shut away, so as not to have microbes and diseases. For many saints, restlessness was a decisive impetus to turn their lives around. This artificial serenity will not do. Yes, a healthy restlessness is fine, the restless heart, the heart that seeks its way.”

The Pope went on to note that “desolation … offers us the possibility of growth, of initiating a more mature, more beautiful relationship with the Lord and with our loved ones, a relationship that is not reduced to a mere exchange of giving and having.”

In concluding remarks, the Holy Father pointed out that “many of our prayers are also somewhat like this: they are requests for favors addressed to the Lord, without any real interest in him. We go to ask, to ask, to ask the Lord. The Gospel notes that Jesus was often surrounded by many people who sought him out in order to obtain something: healing, material assistance, but not simply to be with him. He was pushed by the crowds, yet he was alone. Some saints, and even some artists, have contemplated this condition of Jesus.

Pope Francis then offered a suggestion: “It may seem strange, unreal, to ask the Lord: “How are you?” Instead, it is a beautiful way to enter into a true, sincere relationship, with his humanity, with his suffering, even with his singular solitude. With him, with the Lord, who wanted to share his life with us to the full.”

The Pontifical Council for Promoting the New Evangelization releases a new Directory for Catechesis, providing guidelines for the Church’s mission of proclaiming the Gospel through catechesis and evangelization.

The long-awaited updated Directory for Catechesis was released in the Vatican on Thursday. It was drafted under the direction of the Pontifical Council for Promoting the New Evangelization. It was approved by Pope Francis on 23 March – the liturgical memorial of Saint Turibius of Mongrovejo, a 16th century saint who gave a strong impetus to evangelization and catechesis. This latest edition comes as a follow-up to the “General Catechetical Directory” of 1971, and the “General Directory for Catechesis” of 1997, both   issued by the Congregation for Clergy.

The new Directory seeks to highlight the close link between evangelization and catechesis. It underlines that every baptized person is a missionary called to find new ways of communicating the faith with commitment and responsibility. In this regard, the new Directory proposes three major principles of action: Witnessing, Mercy and Dialogue. The new Directory containing over 300 pages, and is made up of 3 parts divided into 12 chapters.

‘NO SEGWAYS, NO CROWDS, AND ONLY ITALIAN SPOKEN’: HERE’S WHAT VISITING ROME IS LIKE RIGHT NOW

With tourism into Italy still limited, those living in the country have a unique opportunity to see the sights without the usual crowds. Mark Hinshaw, an American writer in Italy, reports back on a particularly magical weekend in Rome.

I did not think it possible to go to Rome and not once hear English spoken. Yet, on a recent trip over several days, we heard nothing but Italian. It was nothing less than astonishing.

During past trips to that city I usually found myself dodging lumbering tour buses, being shoved off sidewalks by phalanxes of tourists, and stepping around stationary couples holding folded maps upside down or squinting at their cell phones in the sun. Once, I was stuck walking behind a gaggle of American teenagers loudly complaining that they couldn’t find a McDonalds.

We live about four hours northeast of Rome. Last week we visited Rome to experience this historic moment that is unlikely to be repeated in our lifetimes.

Due to a lack of customers, many hotels were closed, as were some shops and restaurants. Many of those that had opened were closed by 10pm.

In order to see the Sistine Chapel, one now needs an appointment, as the Vatican Museum limits the number of people inside at any one time. We arrived at 10 for our appointment and were called to the door a few minutes later.

After a security and temperature check, we were in. Everyone wore masks. For the next two hours, we enjoyed a leisurely stroll through the many luxuriant corridors and galleries containing art and artifacts. When we finally entered the Sistine Chapel it was occupied by only a handful of people. And there it was, the famous work by Michelangelo, the glorious ceiling with the finger of God touching the finger of man.

10 STATISTICS THAT SHOW HOW IMPORTANT AMERICAN TOURISTS ARE TO ITALY

As US citizens wait to find out when they’ll be allowed to travel to Italy again, we look at just how important American tourism is to Italy and its economy.

Customers enjoy a drink and the sunshine at the terrace of Cafe Quadri on St. Mark’s Square by the basilica in Venice on June 12, 2020 as the country eases its lockdown aimed at curbing the spread of the COVID-19 infection, caused by the novel coronavirus. (Photo by ANDREA PATTARO / AFP)

Italy was the first European country to allow tourism (and all types of non-essential travel) from within Europe to restart on June 3rd. But other visitors, including from the US, are still barred from entering the country for all but the most urgent reasons.

No date has yet been confirmed for travel to restart from the US.

Unfortunately, it doesn’t look like Americans will be among those allowed entry to the EU when the bloc starts to reopen its borders on July 1st, according to the latest reports.

With Italy’s tourism sector now in crisis due to the shutdown, travel businesses are of course keen for non-EU visitors to return as soon as possible. But if Americans are unable to visit this summer, their absence will be felt profoundly.

Here are a few statistics that show just how important US tourists are to Italy.

The number of Americans who visited Italy in 2019 according to Italian government figures. The US is second only to Germany (with 12.1 million) when it comes to the number of tourists coming to Italy annually.

www.thelocal.it also offers: Ten must-see places within reach of Rome; This weekend you can visit Italy’s hidden ‘green heritage’; The parts of Italy that are offering incentives to tempt tourists back.