It has been said that the ways of the Lord are mysterious and I think today we can say the ways of the Church are also mysterious. Pope Francis, at 10 am yesterday, met with French Cardinal Philippe Barbarin of Lyon who was found guilty by a French court of covering up sex abuse accusations against a French priest. The cardinal had announced he would come to Rome to offer the Pope his resignation.

He offered that resignation yesterday morning. This afternoon, at 2:30 pm local time, the Holy See finally let us know what happened 28 hours earlier.

Today, March 19 is the solemnity of St. Joseph and a Vatican holiday. In Italy, this beautiful feast is Father’s Day!

And today is also the onomastico or name day of Pope emeritus Benedict XVI. Auguri, Santo Padre! Check out this panorama of photos of Pope Benedict: https://www.vaticannews.va/en/pope/news/2019-03/pope-benedict-vi-name-day-march-19.html 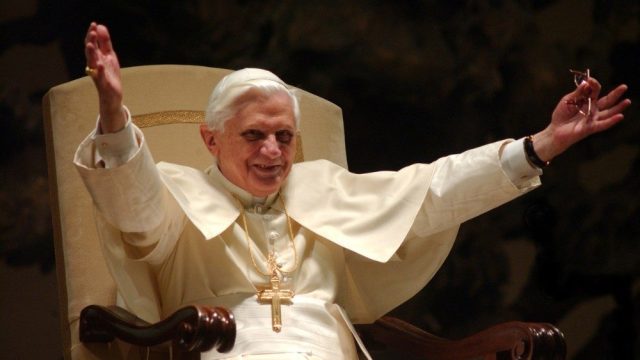 “I can confirm that the Holy Father did not accept the resignation presented by Cardinal Philippe Barbarin, archbishop of Lyon. Aware, however, of the difficulties the archdiocese is experiencing at this time, the Holy Father left Cardinal Barbarin free to make the best decision for the diocese, and Cardinal Barbarin has decided to retire for a period of time and has asked Fr. Yves Baumgarten, vicar general, to assume the leadership of the diocese.

“The Holy See is keen to reiterate its closeness to the victims of abuse, to the faithful of the archdiocese of Lyon and of the whole Church of France who are experiencing a particularly painful time.”

Rome’s Bambin Gesu – Child Jesus – pediatric hospital celebrated its 150 years with a big ceremony this morning in the presence of Italian president Sergio Mattarella and Cardinal Pietro Parolin, Vatican Secretary of State, to name but a few of the dignitaries present.

Bambin Gesu is on Janiculum Hill, about a 10-minute walk from St. Peter’s Square and Vatican City State. According to its website – which boasts “Welcome to a hospital  unlike any other” – Bambin Gesu is the largest pediatric hospital and research center in Europe, with a staff of almost 3,300 including physicians, researchers, nurses, clinical technicians and office staff.

Bambin Gesu was founded in 1869 by the Salviati family – a family aware of the needs of less fortunate children – and began quite simply as a room with four beds.

Today, this sprawling complex provides over 1.9 million healthcare services each year to children and adolescents from all over the world. Known as the hospital for children and the hospital of the Pope, its slogan is “You think about your child, we’ll think about everything else.” The hospital is owned by the Holy See.

The website also explains that “The moral principles and ethical values of the Catholic faith that inspired its creation ensure its continuing development.”

You might remember that in July 2017 Bambin Gesu hospital offered to receive British infant Charlie Gard when the English hospital where he was a patient decided to suspend the child’s treatment for mitochondrial depletion syndrome.

At the time, according to ANSA news, Mariella Enoc, president of Rome’s Bambino Gesù children’s hospital, said that Charlie Gard’s therapy would not have been suspended if he had been at the Vatican-owned structure. “I don’t know why the English hospital decided to suspend the child’s treatments,” Enoc told a news conference. “I know that here with us this would not have happened… I don’t know if it would have been possible to save Charlie, but I do know that lots of time was wasted in legal debates that served for nothing.”
The hospital had offered to help Gard’s mother Connie Yates and her husband Chris Gard after Pope Francis said treatment should be provided “until the end.”