Join me this weekend on Vatican Insider for my conversation with my guest of honor, Fr. Ramil Fajardo, rector of the St. Frances Xavier Cabrini National Shrine in Chicago. In Part I of our conversation, we talk about the upcoming Mother Cabrini Jubilee Year and focus on the life of Mother Cabrini, America’s first citizen Saint, and the migrants, especially Italian, whom she helped for so many years. As we also talk about today’s migrants and refugees, Fr. Ramil is joined by Fr. Ryan Brady. Next week we will look at how Chicago will celebrate this Cabrini Jubilee!

Fathers Ramil (L) and Ryan joined me for dinner after our interview in the brief time I spent in Chicago during my recent, very wonderful, U.S. vacation. 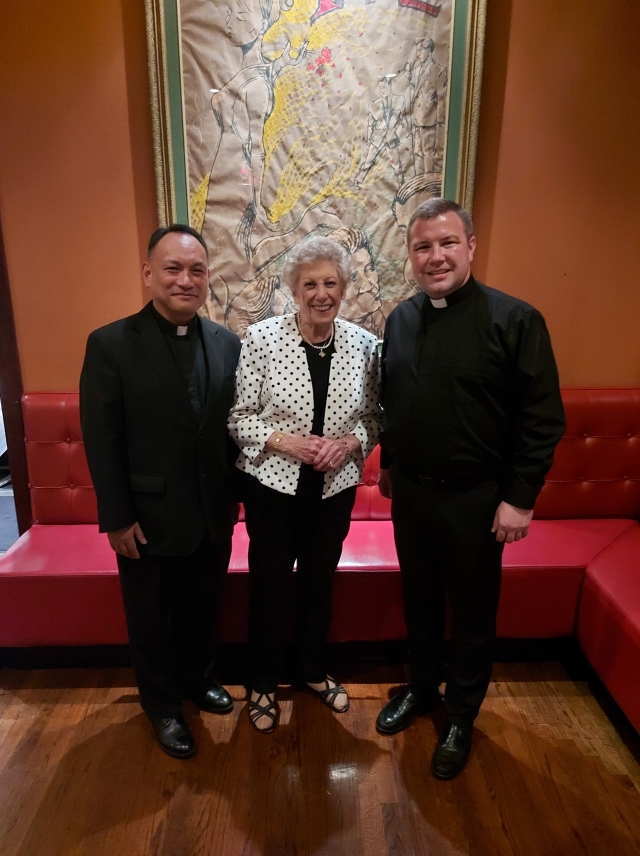 IN THE UNITED STATES, you can listen to Vatican Insider (VI) on a Catholic radio station near you (stations listed at www.ewtn.com) or on channel 130 Sirius-XM satellite radio, or on http://www.ewtn.com. OUTSIDE THE U.S., you can listen to EWTN radio on our website home page by clicking on the right side where you see “LISTEN TO EWTN.” VI airs at 5am and 9pm ET on Saturdays and 6am ET on Sundays. On the GB-IE feed (which is on SKY in the UK and Ireland), VI airs at 5:30am, 12 noon and 10pm CET on Sundays. Both of these feeds are also available on the EWTN app and on www.ewtnradio.net ALWAYS CHECK YOUR OWN TIME ZONE! For VI archives: go to https://www.ewtn.com/radio/audio-archive and write the name of the guest for whom you are serarching in the SEARCH box. Below that, will appear “Vatican Insider” – click on that and the link to that particular episode will appear.

To mark today’s feast of St. Thérèse of Lisieux and first Friday of the month, staff from the EWTN Rome office, including new Rome bureau chief Andreas Thonhauser, attended Mass this morning in the celebrated and ancient Roman church of San Lorenzo in piscibus in the San Lorenzo International Youth Center, just yards from St. Peter’s Square.

It is a small but very wonderful church, almost a chapel, that just begs you to pray when you are inside. It is totally conducive to prayer. As Mass was celebrated by Fr. Johannes Lechner, I could only think of the earliest Christian gatherings when there were no formal churches but rather the faithful met in the homes of prominent Christians.

I took this photo as I crossed St. Peter’s square on my way to Mass: 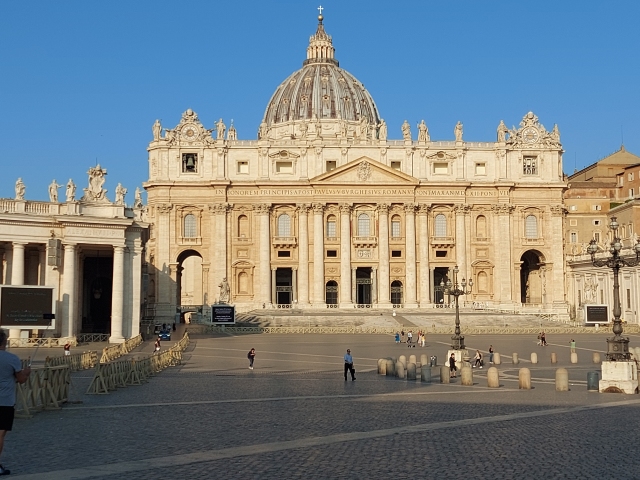 The Church of San Lorenzo in Piscibus (English: Saint Lawrence at the Fish Market) is a 12th-century small church in Rome’s Borgo rione (neighborhood).

The church is dedicated to St, Lawrence, the Roman deacon martyr. The first document to reference it dates to 1143, at which time it was referred to as S. Laurentius in porticu maiore (“Saint Lawrence near the great portico”), referring to its vicinity to the great Portico that in the Middle Ages connected Pons Aelius with the old St. Peter’s Basilica, stretching along the Borgo. The title in piscibus, which first appeared in a 1205 bull of Pope Innocent III, translates literally to “near the fishes.” The name refers either to a fish market that was operated nearby, or the Roman de Piscibus family.

In the Middle Ages the governance of the church was transferred to the canons of the Vatican Basilica, as attested in bulls of Innocent III (October 15, 1205) and Pope Gregory IX (June 22, 1228).

The church housed Poor Clares for some time, before Leo X moved them elsewhere. He replaced them with a lay community from the nearby Church of Santo Spirito in Sassia.

San Lorenzo was held by the Piarist fathers into the early 20th century. It underwent major changes when the central part of the Borgo neighborhood, the Spina di Borgo, was demolished in order to construct the modern Via della Concciliazione, a work that went from 1936 to 1950.

The church was sold by the Italian government to the Holy See in 1941. It was, however, consequently deconsecrated, having been declared redundant. It was afterward converted into a study hall for the Scuola Pontificia Pio IX, and later used as a studio for the sculptor Pericle Fazzini, who used it while working on his massive “Resurrection” piece for the Paul VI Audience Hall between 1970 and 1977.

Pope John Paul II saw the old church – by then more or less forgotten, being hidden by the modern propylea around Piazza Pio XII – as a potential site for a youth ministry center at the Vatican. He reconsecrated it with a special youth Mass in March 1983, expressing the desire that the church become “a hothouse of faith-filled evangelization.” It continues to house the Centro San Lorenzo, which is overseen by the Pontifical Council for the Laity. In November 2007, it was designated a titular deanery by Pope Benedict XVI and given to Cardinal Paul Cordes.   (source: in part from Wikipedia)

(franciscanmedia.org) “I prefer the monotony of obscure sacrifice to all ecstasies. To pick up a pin for love can convert a soul.”

These are the words of Thérèse of Lisieux, a Carmelite nun called the “Little Flower,” who lived a cloistered life of obscurity in the convent of Lisieux, France. And her preference for hidden sacrifice did indeed convert souls. Few saints of God are more popular than this young nun. Her autobiography, The Story of a Soul, is read and loved throughout the world. Thérèse Martin entered the convent at the age of 15 and died in 1897 at the age of 24.

Life in a Carmelite convent is indeed uneventful and consists mainly of prayer and hard domestic work. But Thérèse possessed that holy insight that redeems the time, however dull that time may be. She saw in quiet suffering a redemptive suffering, suffering that was indeed her apostolate. Thérèse said she came to the Carmel convent “to save souls and pray for priests.” And shortly before she died, she wrote: “I want to spend my heaven doing good on earth.”

Thérèse was canonized in 1925. On October 19, 1997, Pope John Paul II proclaimed her a Doctor of the Church, the third woman to be so recognized in light of her holiness and the influence of her teaching on spirituality in the Church.

Thérèse has much to teach our age of the image, the appearance, the “self.” We have become a dangerously self-conscious people, painfully aware of the need to be fulfilled, yet knowing we are not. Thérèse, like so many saints, sought to serve others, to do something outside herself, to forget herself in quiet acts of love. She is one of the great examples of the gospel paradox that we gain our life by losing it, and that the seed that falls to the ground must die in order to live.

Preoccupation with self separates modern men and women from God, from their fellow human beings, and ultimately from themselves. We must re-learn to forget ourselves, to contemplate a God who draws us out of ourselves, and to serve others as the ultimate expression of selfhood. These are the insights of Saint Thérèse, and they are more valid today than ever.

SAINT THÉRÈSE IS THE PATRON SAINT OF: