VATICAN INSIDER: SOME TRIVIA AND FUN STORIES FROM THE VATICAN (PART II)

Wherever you are as you listen to Vatican Insider this weekend, if you’ve decided to spend a brief moment with me, I think I have a fun offering for you in what is normally the interview segment.

I’ve called this Special “Inquiring Minds Want To Know” because I’m going to bring you some trivia – some little known, and often unusual facts about the Vatican, Popes or the Church. Join me for Part II as I look at who is the patron saint of television, the story of the statue of St. Peter in the basilica named for him and why Popes wear white. I’ll also look at who made one of the most visited nativity scenes in Rome and lastly, will tell you which has the biggest dome – St. Peter’s Basilica or the U.S. capitol? 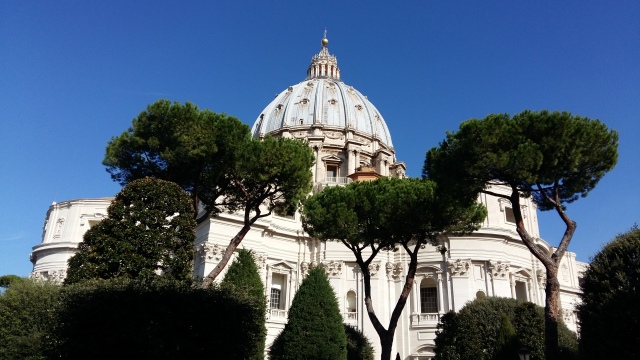 Remember these stories might be a bit of trivia but they are not trivial!

There could be an interesting twist in Turkey’s July 10 decision to turn the once Christian basilica-then mosque-then museum of Hagia Sophia back into a mosque. In 1934, Mustafa Kemal Ataturk, the founding father of the Republic of Turkey, turned Hagia Sophia into a museum, which later became a UNESCO world heritage site. It was Turkey’s current president Erdogan who announce the recent change on July 10. Reaction against the change poured in, not only from many Turks but from around the world and one of the strongest voices was that of UNECSO.

Two things in particular struck me and I have contacted UNESCO but do not have an answer as I write:

1. “This decision announced today raises the issue of the impact of this change of status on the property’s universal value. States have an obligation to ensure that modifications do not affect the Outstanding Universal Value of inscribed sites on their territories.”

2. “UNESCO calls upon the Turkish authorities to initiate dialogue without delay, in order to prevent any detrimental effect on the universal value of this exceptional heritage, the state of conservation of which will be examined by the World Heritage Committee at its next session.”

Both of these imply some possible change in the monetary aspect of being a World Heritage site, such as monies earmarked for restoration, etc.

Hagia Sophia re-opened today for Muslim prayer. Today’s date was important as July 24, 1923 marks the date that Allied powers and Turkey signed the Treaty of Lausanne that ended the Ottoman Empire and signaled the start of the Republic of Turkey. An estimated 7,000 police closed off and policed a large portion of Istanbul adjacent to Hagia Sophia. Those who could not get inside brought their own prayer rugs and prayed outside in the adjacent garden area. An estimated 1,000 faithful prayed inside, including President Erdogan.

Following is the complete statement from the UNESCO website:

Hagia Sophia: UNESCO deeply regrets the decision of the Turkish authorities, made without prior discussion, and calls for the universal value of World Heritage to be preserved.

Paris, Friday 10 July – The Director-General of UNESCO deeply regrets the decision of the Turkish authorities, made without prior discussion, to change the status of Hagia Sophia. This evening, she shared her serious concerns with the Ambassador of Turkey to UNESCO.

Hagia Sophia is part of the Historic Areas of Istanbul, a property inscribed on UNESCO’s World Heritage List. “Hagia Sophia is an architectural masterpiece and a unique testimony to interactions between Europe and Asia over the centuries. Its status as a museum reflects the universal nature of its heritage, and makes it a powerful symbol for dialogue,” said Director-General Audrey Azoulay.

This decision announced today raises the issue of the impact of this change of status on the property’s universal value. States have an obligation to ensure that modifications do not affect the Outstanding Universal Value of inscribed sites on their territories. UNESCO must be given prior notice of any such modifications, which, if necessary, are then examined by the World Heritage Committee.

UNESCO also recalls that the effective, inclusive and equitable participation of communities and other stakeholders concerned by the property is necessary to preserve this heritage and highlight its uniqueness and significance. The purpose of this requirement is to protect and transmit the Outstanding Universal Value of heritage, and it is inherent to the spirit of the World Heritage Convention.

These concerns were shared with the Republic of Turkey in several letters, and again yesterday evening with the representative of the Turkish Delegation to UNESCO. It is regrettable that the Turkish decision was made without any form of dialogue or prior notice. UNESCO calls upon the Turkish authorities to initiate dialogue without delay, in order to prevent any detrimental effect on the universal value of this exceptional heritage, the state of conservation of which will be examined by the World Heritage Committee at its next session.

“It is important to avoid any implementing measure, without prior discussion with UNESCO, that would affect physical access to the site, the structure of the buildings, the site’s moveable property, or the site’s management,” stressed Ernesto Ottone, UNESCO’s Assistant Director-General for Culture. Such measures could constitute breaches of the rules derived from the 1972 World Heritage Convention. (https://en.unesco.org/news/unesco-statement-hagia-sophia-istanbul)

On one of my visits to Lebanon, a very good friend took me to Saint Maroun Monastery in Annaya, the shrine of St. Charbel, perhaps the most beloved of Lebanon’s saints, beloved by both Christians and Muslims. We spent an afternoon and early evening exploring the Monastery of St. Maroun, the hermitage and small museum and also attended Mass in a church built in 1840. Our final moments were at the tomb of the saint that, since 1952, has been in a cave-like structure.

Charbel, a Catholic Maronite monk and priest renown for his holiness, lived from May 8, 1828 to December 24, 1898. for several decades after his death, his body was incorrupt. Though his body is no longer incorrupt, his tomb is one of several in the world that has oil exuding from it, said to have miraculous healing as attested to by many witnesses.

I have a small bottle of that oil – still unopened – from that visit.

Here are some photos I took on that afternoon visit. The shrine is well above sea level and it was cold as we were on our mini pilgrimage.