Those who follow me regularly know of my many trips to Hawaii and my love of the islands and their history, the many friends I have there and how I am involved in promoting the cause of canonization of Joseph Dutton, a layman who for 44 years worked alongside Sts. Damien and Marianne Cope in caring for victims of leprosy on Kalaypapa, Molokai. I read this article today and it is one of my favorite stories of the islands, once the Kingdom of Hawaii. I thought you might enjoy reading about an amazing and beautiful princess who was, among many things, a wonderful surfer. The Tragic Life and Global Legacy of the Last Hawaiian Princess – Atlas Obscura

BIG APPOINTMENTS IN ROME AT GREGORIAN UNIVERSITY AND ORDER OF MALTA

It’s been an interesting few days here from the point of view of a few nominations made by Pope Francis because two of the people named this week I know: Fr. Mark Lewis (no relation), SJ, was named the new rector of the Pontifical Gregorian University, to take office on September 1, and Fra’ John Dunlap named the new Lieutenant of the Grand Master of the Order of Malta.

THE GREGORIAN – In May 2021, I had a long, wonderful visit at the Greg, as the Gregorian is known here in Rome, with Fr. Mark and interviewed him for “Vatican Insider.” At the time he was vice rector for Academics at this Jesuit-run university in Rome. We had an in-depth conversation about his work, how the Greg dealt with the pandemic – everything from classes online requiring all new technology to turn-styles that measure the temperature of those entering the university. I also asked him why he thought Pope Francis was the first ever Jesuit to be elected to the papacy when cardinals of other orders – Dominicans, Franciscans, etc – had been elected. And much, much more! (Gregorian photo)

ORDER OF MALTA – John Dunlap and I became acquainted at the May dinner in New York of the Path to Peace Foundation that honored King Abdullah and Queen Rania of Jordan. The Foundation is associated with the Holy See Mission to the United Nations, and John is on the organizing committee for this annual event. We’ve corresponded since that dinner and since his arrival in Rome in late May, and yesterday I sent my congratulations for his nomination. (Malta photo) 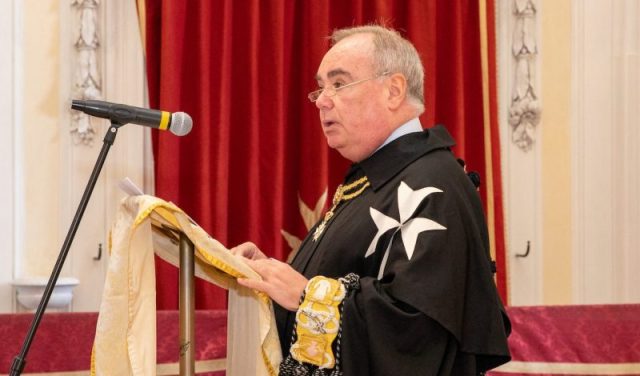 Although the information was public on Monday, only today did the Vatican release a statement about Fra’ John Dunlap’s nomination by the Pope as Lieutenant to the Grand Master of the Order of Malta.

That press release stated that, “in this moment made difficult also following the premature death of the Lieutenant of the Grand Master Fra’ Marco Luzzago, Pope Francis has therefore established the appointment of the new Lieutenant of the Grand Master in the person of Fra’ John Dunlap, who will collaborate closely with the Special Delegate, His Em. Card. Silvano Maria Tomasi, C.S., in the preparation of the Extraordinary General Chapter.”

John Dunlap is one of the elected members of the current Sovereign Council of the Order.

It was also noted that “between the end of August and the first days of September the Pope will convene a meeting of the Joint Working Group for further communications on the upcoming celebration of the Extraordinary General Chapter.”