Tomorrow Pope Francis is scheduled to meet with the estimated 7,000 participants in the annual meeting of the Pontifical Council for the Health Care Pastoral as they focus on the theme, “The Person with Autism Spectrum Disorders: Animating Hope.”The three-day conference began November 20. I will post an update either in this column or on www.facebook.com/joan.lewis.10420

Today the Pope addressed participants in the Seventh World Congress for the Pastoral Care of Migrants that took place this week at the Pontifical Urban University (the university that trains men and women religious to be missionaries or work in missionary lands). Given the U.S. president’s announcement Thursday of an executive decision on migration policy in the United States, you might want to read Pope Francis’ speech (below) to those involved in the Church’s pastoral ministry to migrants.

Who are the Capuchins? Why did they build a cemetery in the center of Rome using the bones of nearly 4,000 friars? Tune in to “Vatican Insider” this weekend to get the answers to those questions! You may have seen the TV show, “Bones” – well, this is the real thing!

And here’s a preview of part of that cemetery (Via Veneto, 27): 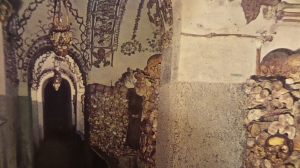 As you know, in the United States, you can listen to Vatican Insider on a Catholic radio station near you (there is a list of U.S. stations at www.ewtn.com) or on Sirius-XM satellite radio. If you live outside the U.S., you can listen to EWTN radio on our website home page by clicking on the right side where you see “LISTEN TO EWTN.” Vatican Insider airs Saturday mornings at 9:30 am (Eastern time) and re-airs Sundays at 4:30 pm (ET). Check for your time zone. Past shows are found in Vatican Insider archives: http://www.ewtn.com/vondemand/audio/file_index.asp?SeriesId=7096&pgnu=

POPE FRANCIS: MIGRANTS ARE PEOPLE ON A JOURNEY OF HOPE

Pope Francis this morning welcomed the participants in the Seventh World Congress for the Pastoral Care of Migrants that took place this week at the Pontifical Urban University, and told them of his “sincere appreciation for your commitment to and solicitude for the men and women who even today are undertaking the ‘journey of hope’ on the path of migration. The congress, sponsored by the Pontifical Council for Migrant and Itinerant Peoples, is focusing on the theme, “Cooperation and Development in the Pastoral Ministry of Migration.”

The Pope began by noting that, “Today, notwithstanding new developments and the emergence of situations which are at times painful and even tragic, migration is still an aspiration to hope. Above all in areas of the world in difficulty, where the lack of work prevents individuals and their families from achieving a dignified life, there is a strong drive to seek a better future wherever that may be, even at the risk of disappointment and failure. This is caused in great part by the economic crisis that, to different degrees, is affecting every country in the world.”

Francis then listed some of the factors that cause migration: “inequality, poverty, overpopulation, the growing need for employment in some sectors of the global job market, disasters caused by climate change, wars and persecution, and the desire of younger people to relocate as they seek new opportunities.” He spoke of the lights and shadows, the highs and lows, the hopes, joys and even disasters of migration for countries of origin and for those who receive migrants.

“In effect,” said the Holy Father, “receiving nations draw advantages from employing immigrants for production needs and national prosperity, not infrequently filling gaps created by the demographic crisis. In turn, the nations which migrants leave show a certain reduction in unemployment and, above all, benefit from earnings which are then sent back to meet the needs of families which remain in the country.”

He also noted that, “some problems also accompany these benefits.  We find in the countries of origin, among other things, an impoverishment due to the so-called “brain drain,” the effects on infants and young people who grow up without one or both parents, and the risk of marriages failing due to prolonged absences. In the receiving nations, we also see difficulties associated with migrants settling in urban neighborhoods that are already problematic, as well as their difficulties in integrating and learning to respect the social and cultural conventions that they find.  In this regard, pastoral workers play an important role through initiating dialogue, welcoming and assisting with legal issues, mediating with the local population. In the countries of origin, on the other hand, the closeness of pastoral workers to the families and children of migrant parents can lessen the negative repercussions of the parents’ absence.

The Pope stressed that, “the Christian community, in fact, is continuously engaged in welcoming migrants and sharing with them God’s gifts, in particular the gift of faith. The Church promotes pastoral plans for the evangelization and support of migrants throughout their journey from their country of origin, through countries of transit, to the receiving countries. She gives particular attention to meeting the spiritual needs of migrants through catechesis, liturgy and the celebration of the Sacraments.

Francis admitted that, “sadly, migrants often experience disappointment, distress and loneliness.  In effect, the migrant worker has to deal with the problem both of being uprooted and needing to integrate. Here the Church also seeks to be a source of hope: she develops programs of education and orientation; she raises her voice in defense of migrants’ rights; she offers assistance, including material assistance to everyone, without exception, so that all may be treated as children of God.”

He said people must be capable of “valuing a migrant’s potential rather than seeing them only as a problem to be confronted and resolved. … How much more necessary must this be in the case of the Christian community, where no one is a stranger and, therefore, everyone is worthy of being welcomed and supported.” The Holy Father quoted his 2014 Message for the World Day of Migrants and Refugees: “It is less the criteria of efficiency, productivity, social class, or ethnic or religious belonging which ground that personal dignity, so much as the fact of being created in God’s own image and likeness (cf. Gen 1:26-27) and, even more so, being children of God. Every human being is a child of God! He or she bears the image of Christ!”

“Migrants, therefore,” he concluded, “by virtue of their very humanity, even prior to their cultural values, widen the sense of human fraternity. At the same time, their presence is a reminder of the need to eradicate inequality, injustice and abuses.  In that way, migrants will be able to become partners in constructing a richer identity for the communities which provide them hospitality, as well as the people who welcome them, prompting the development of a society which is inclusive, creative and respectful of the dignity of all.”

(Vatican Radio) – Saying people, not money, create development, Pope Francis called on Thursday for courageous initiatives to rethink our economic system so that we do not become slaves of money. His remarks came in a video message delivered to participants attending a Festival of Social Doctrine in Verona, Italy, promoted by the local Church.

The Pope urged people not to become discouraged by the economic crisis but instead turn their energies towards ways of “rethinking our economic model and the world of work.”  He warned that “the great temptation” when faced with these difficulties is to concentrate “on tending our own wounds and use that as an excuse to not heed the cry of the poor” and all those who are suffering because they have lost their jobs and the dignity that goes with that. The risk, he went on, is that “this indifference makes us blind, deaf and dumb”, closed in to the outside world and only concerned with ourselves.

Pope Francis spoke instead of the need to move beyond and “abandon the stereotypes which are considered safe and guaranteed” in order to respond to the real needs of people. In the field of economics, he Said,, we urgently need to take the initiative because “the system tends to homogenize everything and money becomes its master.”  Taking the initiative in this field, he added, means having the courage not to allow ourselves to be imprisoned and subsequently enslaved by money.

The true problem explained the Pope “is not money as such but people.”  This is because “money by itself does not create development” but instead we need people who have the courage to take the initiative. Pope Francis stressed that taking the initiative in this way means overcoming a tendency to always ask the state or other bodies for assistance but instead use our creative talents to find new ways of earning a living. He concluded his address by expressing his concern over the high number of unemployed young people, saying we need to invest more in them and give them a great deal of confidence.

Interesting news from the Vatican’s Philatelic and Numismatic (stamps and coins) Office: Today they issued a philatelic set celebrating Pope’s Francis’ apostolic journeys in 2013. The proceeds from the sale of the €.85 stamp and the €3.40 philatelic booklet, both of which celebrate the visit of Pope Francis to Lampedusa in July 2013, will be donated to Pope Francis for charity works to support migrants. The website for the philatelic office is: http://www.vaticanstate.va/content/vaticanstate/en/servizi/ufficio-filatelico-e-numismatico.html

The UFN (Italian acronym for this office) informs collectors that the stamps of the commemorative joint series of the II Year of Pontificate of Pope Francis issued by the Philippine Postal system can be requested at: Philatelic Division – Philippine Postal Corporation, Liwasang Bonifacio – 1000 Manila, Philippines: E-mail:   philpost[dot]stamps[at]gmail[dot]com – website: http://www.phlpost.gov.ph