OF CARDINALS, CONSISTORIES AND COURTESY VISITS

Following the consistory ceremony Saturday in which the new cardinals were created, the new red hats welcomed family and friends in what are known here as courtesy visits, most of which took place in the Paul VI Hall, with several in the Hall of Blessings in the Apostolic Palace.

I have been here many times but the first was the most special. It was March 1961. I was spending an academic year studying French in Fribourg, Switzerland and our spring break was six weeks long, including three in Italy. Our time in Rome included a papal audience with Pope John XXIII who held occasional audiences in the Hall of Blessings. The Paul VI Hall, of course, was only built by John’s successor, Paul, and named for him.

In the atrium of the Paul VI Hall, I met Cardinal McElroy of San Diego who, on Sunday at 5 pm, presided at Mass at St. Patrick’s in Rome, the church for Catholic Americans and English-speaking Catholics. He was joined by American Cardinals Edwin O’Brien, Wilton Gregory, Roger Mahony, Blasé Cupich, Daniel diNardo and Joseph Tobin. Numerous bishops were present as well.

Several of us on the parish council were asked to welcome guests to St. Patrick’s for the Mass, including a very large contingent of Catholics from all parts of California. Of all the cardinals present, the only one I did not know before the weekend was Cardinal McElroy. I have known all of the American cardinals now in Rome for the consistory for many years. (Cardinal McElroy celebrates Mass of Thanksgiving in Rome | Catholic News Agency)

Saturday at the courtesy visits, I had some fascinating encounters with a number of cardinals and I wanted to bring those stories to you today, along with photos. However, recently I’ve had huge problems uploading photos to my laptop and do not know if it is the fault of the laptop or my phone. I’ll bring you that report tomorrow.

THE PAPAL DAY IN L’AQUILA: HOPE AND HUMILITY, RUINS AND RELICS

Sunday, Pope Francis went to L’Aquila in central Italy to preside at Mass and open the Holy Door of Santa Maria di Collemaggio basilica for the 728th edition of the Celestine Pardon, an annual August celebration that dates to Pope Celestine V who is buried in this church. One of the final acts in his 5-month papacy was to issue an edict stating that Popes could resign. And Celestine did so promptly upon publishing this edict in December 1294.

Forward a bit: 719 years later Benedict XVI resigned, having prayed at Celestine’s tomb in 2009 after the L’Aquila earthquake, leaving his pallium atop the tomb. In some of the most moving moments of his visit to L’Aquila, Francis also prayed for some time Sunday before his predecessor’s tomb.

Earlier at Mass, in his homily, Pope Francis recounted off the cuff how that morning, the helicopter pilot could not land the plane as planned due to fog and that, after circling many times, he “finally found a small opening in the fog” and landed. Remarking on that incident, Francis suggested that even when fog seems to shroud our lives, God will find a hole, an opening.

I found the Holy Father’s homily beautiful but also intriguing (as you will see below), especially his remarks on Pope Celestine’s resigning the papacy, an act that Francis called “one of humility.”

Is that something to think about? If the Pope resigns, is that an act of humility? And if he does not resign?

POPE IN L’AQUILA: “FAITH ILLUMINATES PAIN AND DRIVES EFFORT TO REBUILD”:  Pope Francis travelled 100 kilometers to the central Italian city of L’Aquila 13 years after a devastating earthquake killed 309 people, and he encouraged residents to continue rebuilding their lives with faith in God. He kicked off his pastoral visit by meeting civil authorities and families of the victims of the 2009 earthquake, which struck in the middle of the night on April 6, 2009. Around 66,000 people were left homeless and 309 people were killed in the wake of the quake and subsequent tremors. On Sunday, Pope Francis followed in the footsteps of his predecessor, Benedict XVI, who made a visit less than a month after the earthquake, on 28 April 2009. The Pope also visited the ruins of the Cathedral of St. Maximus, which was partially destroyed by the 6.3-magnitude earthquake. (Pope in L’Aquila: ‘Faith illuminates pain and drives effort to rebuild’ – Vatican News

POPE FRANCIS AT MASS:  During Mass in the central Italian city of L’Aquila for the occasion of the “Celestinian Pardon,” Pope Francis recalled God’s power to accomplish all things, along with the courageous witness, often misunderstood, of Pope Celestine V who resigned in 1294. Noting that he celebrates Mass on “a special day,” that of “the Celestinian Pardon,” the Holy Father explained that the relics of Pope Celestine V… are preserved in L’Aquila. He said that Pope Celestine “humbled himself,” finding favour with God. “We erroneously remember Celestine V as he ‘who made a great refusal’, according to the expression Dante used in his Divine Comedy. But Celestine V was not a man who said ‘no’, but a man who said ‘yes’.” In fact, the Pope noted, there is no other way to accomplish God’s will, than to assume the strength of the humble. (Pope at Mass in L’Aquila: ‘God can accomplish all things’ – Vatican News)

Welcome to Vatican Insider on this final weekend of August and what a weekend it promises to be in Rome! My guest this week in the interview segment is Msgr. Tom Powers, the new rector of the Pontifical North American College and a wonderful friend of many years! In Part I of our talk, he tells how he was invited to be rector, looks back a bit at his own years in Rome as a seminarian under two rectors, now Cardinals, Edwin O’Brien and Timothy Dolan and explains exactly what the duties of a rector are.

The new seminarians had just arrived and Msgr. Powers spoke about how they all met and exchanged inspirational vocation stories. He spoke of the vocation stories as “moments of God’s grace.” He said “my work here, our work here, is to form men to the heart of Christ.” Among his powerful remarks were his words on answering the call this past spring to become the rector, saying: “My priesthood has been one of saying yes to the Church.”

Photo taken in rectory where he was pastor before coming to Rome: 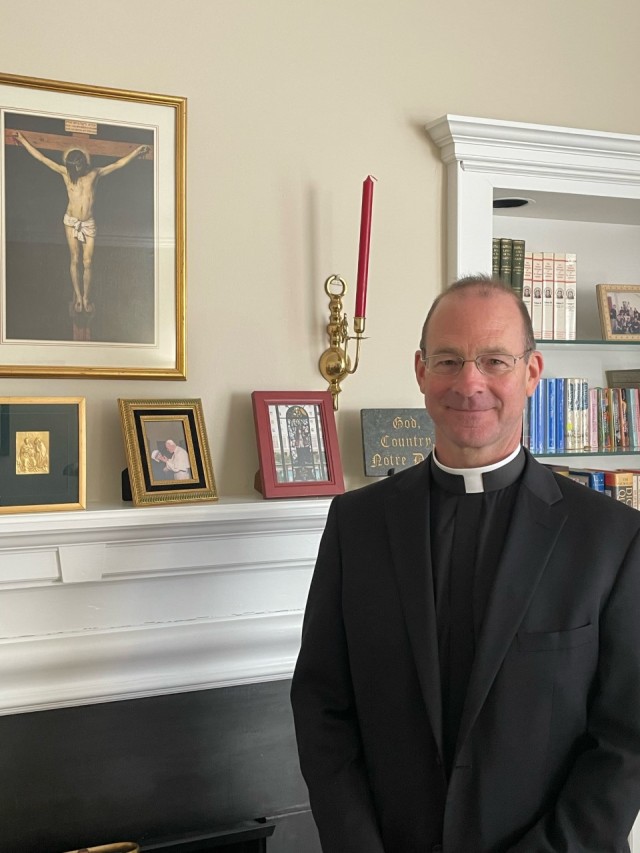 IN THE UNITED STATES, you can listen to Vatican Insider (VI) on a Catholic radio station near you (stations listed at www.ewtn.com) or on channel 130 Sirius-XM satellite radio, or on http://www.ewtn.com. OUTSIDE THE U.S., you can listen to EWTN radio on our website home page by clicking on the right side where you see “LISTEN TO EWTN.” VI airs at 5am and 9pm ET on Saturdays and 6am ET on Sundays. On the GB-IE feed (which is on SKY in the UK and Ireland), VI airs at 5:30am, 12 noon and 10pm CET on Sundays. Both of these feeds are also available on the EWTN app and on www.ewtnradio.net ALWAYS CHECK YOUR OWN TIME ZONE! For VI archives: go to https://www.ewtn.com/radio/audio-archive and write the name of the guest for whom you are searching in the SEARCH box. Below that, will appear “Vatican Insider” – click on that and the link to that particular episode will appear.

POPE ON L’AQUILA VISIT: “FORGIVENESS ONLY WEAPON AGAINST WAR”

Pope Francis speaks to a local news publication of L’Aquila ahead of his pastoral visit on Sunday, and says it is harder to forgive than to make war, in reference to the Celestinian Pardon that he will inaugurate while in the central Italian city.

“It takes more strength to forgive than to wage war… Forgiveness is the only possible weapon against all war.”

Pope Francis offered that message on Friday in an interview with “Il Centro”, a local news publication in L’Aquila.

He is scheduled to make a pastoral visit to the central Italian city in the Abruzzo region on Sunday morning, where he will open the holy door of the annual Celestinian Pardon.

Referring to the war in Ukraine and other conflicts, the Pope recalled that “evil is never overcome by evil, but only with good.”

Forgiveness, he said, requires great interior and cultural maturity, as well as a culture of peace.

“Without this effort,” said the Pope, “we will remain stuck in the logic of evil, which is beholden to the promotion of the self-interests of those who take advantage of conflicts to enrich themselves.”

Pope Celestine V, who instituted the Celestinian Pardon in 1294, “knew how to promote humility and love for the poor,” he said, adding that our contemporary society can learn much from these attitudes.

Asked about the devastating earthquake of 2009 that killed 309 people, Pope Francis recalled that, “pain and suffering are always a mystery.”

“Jesus Himself experienced this darkness of feeling alone and defeated. But at the same time, he taught us that it is precisely in these moments when everything seems lost that we can make an unexpected gesture: entrust ourselves to the Lord!”

The Pope added that there can be no rebirth in the wake of destruction without the act of entrusting ourselves to the Lord.

However, he said, our interior certitude in God’s mercy is a gift which must be requested and “protected from everything that would seek to snuff it out.”

Praising a Church close to the poor

Pope Francis then praised the many ways in which the local Church in L’Aquila has reached out to support the poor and those who have suffered due to the earthquake.

Many houses and buildings still need to be rebuilt in the city, including the Catholic Cathedral.

“I thank the city’s pastors,” said the Pope. “And I especially thank all priests and men and women religious who, along with lay people, have sought to rebuild, an effort which involves not only homes but also the soul itself of the people.”

“We cannot go very far if we walk alone. Unity alone can allow us to make truly difficult changes. We must leave behind all those things which divide us and hold up instead everything which unites us.”

Encouragement in the faith

Pope Francis concluded the interview with “Il Centro” by saying that he comes to encourage the people of L’Aquila in their faith.

“Humility, love, closeness, forgiveness, and mercy truly are the best way to proclaim the Gospel to the men and women of today and of all times.”

POPE WILLING TO GO TO NORTH KOREA IF INVITED

Pope Francis has expressed willingness to visit North Korea, asking the regime to invite him to the country.

In an interview with KBS at the Vatican’s Paul VI Audience Hall on Wednesday, the pontiff said he is willing to travel to North Korea upon receiving the invitation, which he will not reject.

Pope Francis, the 266th head of the Roman Catholic Church, has repeatedly indicated that he is willing to visit North Korea, but it is rather unusual that he has requested an invitation from North Korea using such direct and strong rhetoric.

The pope devoted a considerable part of the 30-minute interview to the subject of war and peace, while citing weapons production a major concern.

He prayed that God will be with all people, both in South and North Korea. He asked South Koreans, in particular, to work for peace as they are well aware of what a war is like, having experienced the pain of armed conflict.