I rarely if ever make prayer requests but today is truly an exception.

I met Brad Easterbrooks, a seminarian from the diocese of San Diego, when he was studying in Rome at the North American College. As I had been in the past, I was at the California table for Thanksgiving Dinner last November with Brad and other California seminarians and priests for a great dinner and engaging conversations.

Brad had been ordained a deacon in September and had such an interesting story and a delightful personality that I asked him to be my guest on “Vatican Insider” to tell the story of his vocation to the priesthood that he hopes to live as a military chaplain. That two-part interview aired in February. What so struck me in our conversation was his joy at the anticipation of his ordination to the priesthood. He radiated happiness.

Brad’s dream came true when he was ordained on Friday, June 24, 2022 at St. Gabriel Church in Poway, California. Joining the new priest were his mother, a brother, an aunt and other family members. His father David, whose life had been focussed on Brad becoming a priest, was in the hospital and unable to attend.

A day later, the new Fr. Easterbooks offered his first Mass at Our Lady of the Rosary church in San Diego for the repose of the soul of his father.

I learned this tragic news just days ago via an email from some friends whom I see on occasion in Rome and who knew the Easterbooks family.

So my prayer request is for Fr. Easterbrooks and his family as he starts his priestly life without his beloved Dad. It is hard for me to think of such a glorious moment in one’s life being touched by the searing pain of such a loss!

David Easterbrooks was buried in the historic and beautiful Mission San Luis Rey cemetery where my parents are buried as well as my brother-in-law.

May God sit on your shoulder, Fr. Brad!

Pope Francis this morning received Prince Albert II and Princess Charlene of the Principality of Monaco for about a half hour in the papal library. Informal conversation, an exchange of gifts and meeting several other representatives from the principality marked the encounter.

These photos are from the Italian and French pages of Vatican News. The meeting (as I write) has not appeared in English news. 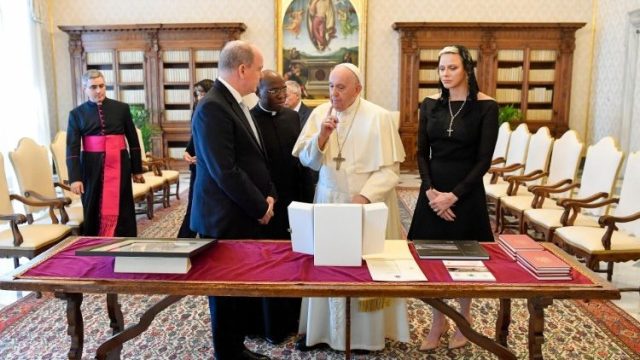 Francis gifted the couple a bronze work depicting a child helping another to get up with the words “Amare Aiutare” (To Love To Help), together with the volumes of papal documents, including the year’s message for peace, the document on human fraternity and the book on the Statio Orbis of March 27, 2020 edited by the Vatican Publishing House. A print depicting the chapel of the Palace of Monaco was donated to the Pope by the royal couple..