I am so happy to share the lovely news of the two Ratzinger brothers – Pope emeritus Benedict XVI and Msgr. Georg – saying mass together in Regensburg, Germany. And this just days before the June 29 anniversary of their priestly ordination in the cathedral of Freising on that day in 1951!

Msgr. Georg lives in this building on Luzengasse in Regensburg.

I took this photo in September 2006 when Benedict made a visit to his beloved Bavaria. Wednesday, September 13, was set aside as a day for the two brothers to spend together – no public activities for Benedict XVI – and the Munich Tourism Office offered several possible day or half-day trips for the media. I signed up for a trip to visit all the places of the pope’s childhood and youth and to this very day, it was one of the best travel memories I ever had in Germany.

When I returned to Rome I bought a photo printer, took perhaps 24 of the best photos I had taken during my trip and made copies from the memory card. I bought a beautiful photo album, put one picture on each page with a one-word description of each place (not that I thought it would be necessary!) and gave that album to Pope Benedict!

Maybe some day I’ll do a slideshow of some of the enchanting places associated with the pope’s childhood and youth.

As you know, because of the COVID-19 crisis and restrictions imposed on and by people for in person interviews – at least up to now – in recent weeks I have filled what is normally the interview segment of Vatican Insider with Specials. So far, I’ve explored 6 of the 7 Roman basilicas known as the Pilgrim Basilicas – St. Peter’s, St. John Lateran, St. Mary Major, St. Paul’s outside the Walls, Holy Cross in Jerusalem, and St. Lawrence al Verano. Come with me this weekend as we go to the basilica of St. Sebastian that was built above the catacombs of the same name and is dedicated to the third-century saint who was twice martyred.

So tune in for some fascinating facts and when you come to Rome, you’ll have this podcast as your guide to St. Sebastian!

IN THE UNITED STATES, you can listen to Vatican Insider (VI) on a Catholic radio station near you (stations listed at www.ewtn.com) or on channel 130 Sirius-XM satellite radio, or on http://www.ewtn.com. OUTSIDE THE U.S., you can listen to EWTN radio on our website home page by clicking on the right side where you see “LISTEN TO EWTN.” VI airs at 5am and 9pm ET on Saturdays and 6am ET on Sundays. On the GB-IE feed (which is on SKY in the UK and Ireland), VI airs at 5:30am, 12 noon and 10pm CET on Sundays. Both of these feeds are also available on the EWTN app and on www.ewtnradio.net ALWAYS CHECK YOUR OWN TIME ZONE! For VI archives: http://www.ewtn.com/multimedia/audio-library/index.asp (write Vatican Insider where it says Search Shows and Episodes)

The brothers celebrated Mass together at the house in Regensburg and the pope emeritus then travelled to the diocesan seminary in the afternoon to rest.

REGENSBURG, Germany — Pope emeritus Benedict XVI will celebrate Mass with his ailing brother on the feast of the Sacred Heart during his first full day in Germany Friday.

A June 19 statement from the Diocese of Regensburg said that after Pope Benedict XVI arrived from Rome at noon on Thursday he immediately visited his 96-year-old brother, Msgr. Georg Ratzinger.

The brothers celebrated Mass together at the house in Regensburg and the pope emeritus then travelled to the diocesan seminary in the afternoon to rest. In the evening, he returned to see his brother.

The diocese said: “For the first morning in his old homeland, an authentic Bavarian breakfast awaited the pope emeritus in the seminary. There were pretzels, which Archbishop Georg Gänswein, who accompanied him, was also pleased about.”

“In the course of the morning the two brothers will celebrate together a high mass for today’s feast of the Sacred Heart.”

The diocese added that “afterwards there will be apple strudel,” a popular pastry in Bavaria and Austria.

POPE EMERITUS AT BEDSIDE OF HIS BROTHER IN GERMANY

A state flight from Ciampino airport brought Pope Emeritus Benedict XVI to Munich and then to Regensburg this morning. The Pope Emeritus joined his seriously ill brother Georg with a decision that once again surprises everyone. 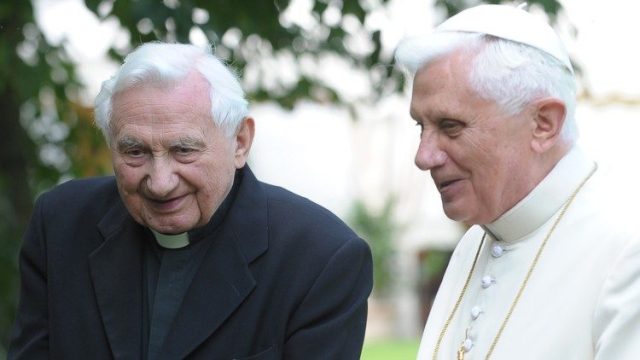 Around 12.30 Benedict landed in Munich and then went to his brother’s residence.  Before getting into the car to get to the diocesan seminary where the Pope emeritus is staying, he blessed little Kostantin, two weeks old. Despite his 93 years the Pope emeritus was in good shape and energy.

Monsignor Ratzinger is 96 years old and the bond between the two brothers has always been very strong. The Pope Emeritus was accompanied by Archbishop Gänswein, his personal secretary.

The decision was made quickly after his brother’s health had rapidly deteriorated in recent days, although he remained in his residence.  Because of the pandemic, Monsignor Georg had not been able to be in the Vatican as always at Easter.

Benedict was received by Bishop Georg Bätzing. Prior to his departure Benedict received a visit from Pope Francis.