UPDATE ON ISAAC – From emails I got this morning from Fr. Craig:

Issac went into surgery at 3:00 pm.  The goal of the surgery was to remove the cysts and biopsy the two known tumors.  The neurosurgeon was successful in obtaining tissue and the cyst drainage, unfortunately numerous small clusters of tumors were also discovered.  We will start chemotherapy when the pathology is confirmed.

2nd email really made me smile:

By the way, when he woke up for those few minutes he wanted to watch the video from Mr. Del Rio and Derek. (see my Monday post about this)

A GIFT FOR YOU:

Food for thought on a torrid July day – in Rome, for sure! I got the following six “little stories” in an email from a friend and enjoyed them as they are pithy but so very true! You can guess why I love – and will often repeat – Number 6! Young at heart – that’s me!  Joan

{1} Once all villagers decided to pray for rain, on the day of prayer all the people gathered, but only one boy came with an umbrella.  That’s FAITH

{2} When you throw a baby in the air, she laughs because she knows you will catch her. That’s TRUST

{3} Every night we go to bed, without any assurance of being alive the next morning but still we set the alarms to wake up. That’s HOPE

{4} We plan big things for tomorrow in spite of zero knowledge of the future. That’s CONFIDENCE

{5} We see the world suffering, but still we get married and have children. That’s LOVE

Have a happy day, live your life like the six stories! Love the people God gave you because we don’t know how long we will be sharing this life!

ASSISI: MASS AT THE TOMB OF ST. FRANCIS

Saturday, July 4, Bishop Baker had arranged to say Mass at 8 am at the tomb of St. Francis. I had visited and prayed in this small chapel many times over the years but never had it been as special as it was Saturday. The Del Rios and Helows and I were at Mass, as was a family from Florida, friends of the bishop, that happened not only to be on the same plane to Rome days earlier but in Assisi at the same time we were! Perhaps a dozen people all told attended this Mass.

Jack Del Rio and I did the readings while Joe Helow was the bishop’s “altar boy.” Linda Del Rio was a minister of the cup at communion but I did not get a photo of her – apologies to Linda.

Bishop Baker’s homily last Saturday and in other Masses focused on peace. 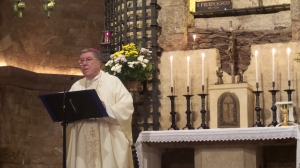 Afterwards, a Franciscan priest took photos of all of us with Bishop Baker and we took one of him. 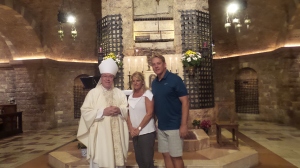 In the Prayers of the Faithful we prayed, of course, for the United States as it celebrated the 239th anniversary of independence, and I added prayers for the Holy Father’s trip to Latin America and for little Isaac.  Bishop Baker had not been in the dining room when Fr. Craig told us Isaac’s story, so I explained to him over breakfast at a nearby café. After that, we were praying for Isaac almost every time we passed a church, went inside a church or heard church bells ring!

I realized I did not have a photo of Julie Helow so here is one with her husband Joe from a lunch we had together:

The Catholic Center for Studies and Media (CCSM) in Amman. Jordan has announced that the United Nations Educational, Scientific and Cultural Organization (UNESCO) has voted to add the Baptism site of Jesus Christ to the World Heritage sites. (Pope Francis at the site last year)

CCSM Director Fr. Rifat Bader praised the efforts of Jordan’s King Abdullah and Prince Ghazi Bin Mohammad, chairman of the board of trustees of the Baptism Site; the Ministry of Tourism and Antiquities; and the Jordan Tourism Board to see this objective attained. He also noted that it is a source of pride that four Popes had prayed at the Baptism site’s blessed waters over the past 50 years – Pope Paul VI visited the site in 1964, St. John Paul II in 2000, Pope Benedict in 2009 and Pope Francis in 2014.