I promised myself not to go near my laptop on December 25th and 26th and I kept to that, thus the late posting of my Christmas Day celebrations. I did briefly look at e-cards on my iPad but mainly allowed myself time to enjoy friends, listen to music, read a bit and I actually saw several good movies – the kind that come around seasonally with stories that make you feel good and allow you to think about the real reason for the season!

I hope you also enjoy my story about the bells of St. Peter’s. I bet you did not know they have names!

CHRISTMAS 2021 IN THE ETERNAL CITY

Christmas was a rainy, gray day in Rome but the spirit here was just the opposite as the day was filled with marvel at the birth of Our Lord and Savior and people filled with joy as they marked this solemnity. Churches were filled with candles and nativity scenes and poinsettias and smiling faithful, including families of all sizes.

I was a lector at the 10:30 Christmas Day Mass at St. Patrick’s in Rome and it was wonderful to see the church so filled with faithful – correct social distancing was observed but we have a good sized church and many pews were filled.

Fr. Steve Petroff, our pastor, and Fr. Joe Ciccone, our vice pastor, had celebrated several Masses prior to the 10:30, including the vigil Mass on the 24th. Fr. Joe said the 10:30 and also was the moving force behind our wonderful nativity scene, one of the best ever.   There is actually a second nativity scene in one of the chapels in the back of the church – on you left as you enter.

Here is the nativity in front of the main altar:

Two of our special guests were Newt and Callista Gingrich, in Rome for the holidays. You will recall that Callista was the U.S. ambassador to the Holy See in the Trump administration. We have been friends for years and it was a joy to see them at Mass and then for a Christmas lunch with another dear friend, and at Sunday Mass as well.

Thanks to Callista for some of the people photos: 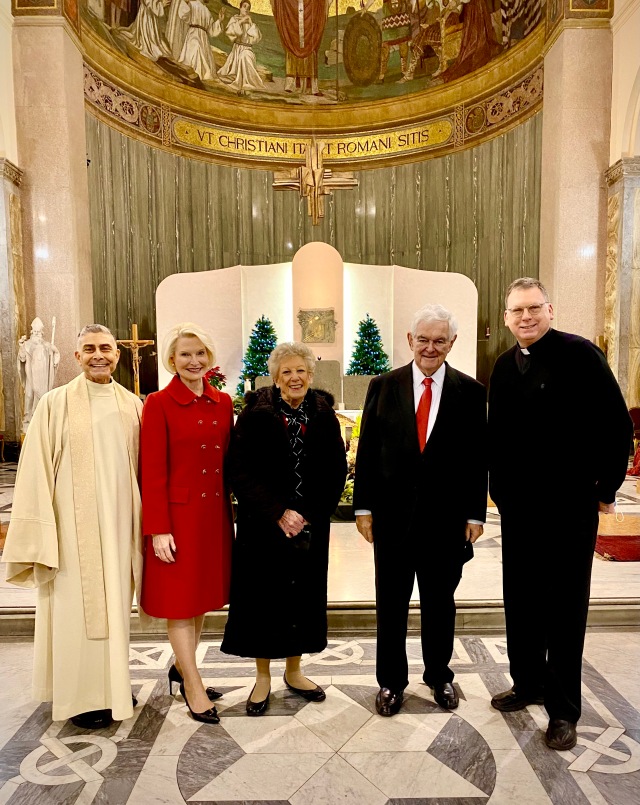 If you cannot be with family for Christmas, spending the day with friends who are like family is the next best thing!

THE BELLS OF ST. PETER’S

Did you know that the six bells of Saint Peter’s Basilica all have names?

There are two clock towers on St. Peter’s Basilica façade. The one on the right with the statue of Saint Simon the Zealot was designed by Giuseppe Valadier, an architect and gold- and silver-smith.

Under the clock on the left are the six bells of the Basilica, electrically operated since 1931, so that even the largest bell can be tolled from a distance. The oldest bell dates from 1288 – the newest from 1932. And they all have names!

The largest of the bells – CAMPANONE – campanone is Italian for Great Bell – has a diameter of 8.2 feet, a height of 8.5 feet and measures 24 1/2 feet in circumference. It weighs about 9 tons. It was cast in 1786 by Luigi Valadier and blessed by Pius the VI the same year.

I took this photo of the bell tower one day while walking on the terrace level of the basilica that has the statues of the 12 Apostles and Jesus. You can partially see the largest bell and it was ringing as I took the picture – you can see its angle!

The next largest bell is called CAMPANONCINO. It is from 1725 and weighs 3 1/2 tons.

The third largest bell is also the oldest – this is named THE BELL OF THE ROTA and dates from 1288 . weighing 1.8 tons.

The fourth Bell is from 1909, It is named THE BELL OF THE SERMON and weighs just .83 tons.

The fifth bell is called THE AVE MARIA. It weighs just a quarter of a ton and was cast in 1932.

The sixth and smallest bell is LA CAMPANELLA . It weights 235 kilos and was cast in 1825.

The PLENUM – the full complement of all six bells – is rung at Christmas and Easter, on the June 29 solemnity of St. Peter and Paul, every time the Pope imparts the “Urbi et Orbi” blessing and when a pope is elected.

So if you were in St. Peter’s Square December 25, 2021, Christmas Day you heard the Plenum!

And now – the last bit of trivia about the bells – THE STUDY OF BELLS IS CALLED CAMPANOLOGY.