A heads up: I leave tomorrow afternoon for a few days in Sorrento on the Amalfi Coast, my first excursion out of Rome since March 13! It should be very interesting, even with all the Covid-related rules, regulations and restrictions. However, Sorrento and surroundings are a small slice of paradise so this will be more a delightful change of place, than a change of pace. I’ll be working, writing blogs (no promises for Monday!), posting stories and photos and doing radio shows, etc. It might be a “Joan’s Rome” lite but that’s OK!

When I became aware of Joachim and Ann (also spelled Anne), I started to imagine Jesus as a toddler, following his grandparents around the house when they came to visit or he went to their house. I pictured him perhaps helping in a garden or in the kitchen and surely in St. Joseph’s carpenter shop, asking a lot of questions. Were they around when Jesus was a teen? We know so little about them that we don’t know how old he was when they died.

By the way, this is one of my very favorite pictures! (from Pinterest) 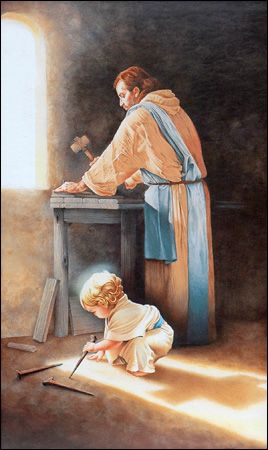 Pope Francis has spoken of grandparents countless times in his papacy – one could write a short book on the subject. In addition, he has reminisced often about his own grandmother Rosa: On one trip, he said; “I had the grace to grow up in a family where faith was lived in a simple and concrete way; but it was above all my grandmother, my father’s mother, who marked my path of faith. She was a woman who explained to us, who spoke to us about Jesus, who taught us the Catechism.

“I always remember that on Good Friday evening she would take us to the candlelight procession, and at the end of this procession… my grandmother would make us children kneel and she would say: ‘Look, he is dead, but tomorrow he will rise again.” I received the first Christian announcement from this woman, from my grandmother! That’s beautiful! The first announcement at home, with the family! And this makes me think of the love of many mothers and grandmothers in the transmission of the faith. It is they who transmit the faith.”

If you are blessed enough to have living grandparents; visit as often as possible, collect stories, ask a thousand questions, learn about the richness of your past! And with today’s technology be sure to record their stories and memories – and take pictures!

POPE TO YOUNG PEOPLE: USE THE ‘FANTASY OF LOVE’ TO REACH OUT TO THE ELDERLY

Pope Francis urges young people to show tenderness to the elderly by connecting with them, “calling them, video-chatting with them…sending them hugs.”

The Pope invited them to reach out tenderly to the elderly by doing something concrete for those “who are most alone in their homes or retirement residences, and who have not seen their loved-ones for months”.

“Dear young people, the Pope continued, “each elderly person is your grandparent!” He then begged young people not to leave the elderly alone. “Use the fantasy of love”, he told them. Then he gave them some suggestions: “Call them, videochat with them, send them messages, listen to them, go and visit them when it is possible while observing health precautions, send them a hug.”

Pope Francis then picked up one of his favorite themes, reminding young people that the elderly are their “roots.”

“An uprooted tree does not grow or bear flowers or fruit”, he said. Being united and connected with the elderly is important because that is how we remain connected to our roots, he explained. He then quoted an Argentinean poet, who said that the flowers that we see on trees come from what is underground.

After his words, the Pope asked for a round of applause for grandparents.