Pope Francis this morning had quite a number of private audiences including President Katalin Novak of Hungary and Mr. Kay Rala Xanana Gusmão, former president of the Republic of East Timor, in Rome for the August 27 consistory in which East Timor will get a cardinal in the person of Virgilio do Carmo da Silva of Dili.

The Holy Father also received two groups in audience, including participants in the World Conference of Secular Institutes and members of the International Catholic Legislators Network. As you will see, his remarks to Catholic legislators are important, current and much-needed in today’s world.

Pope Francis urges members of the International Catholic Legislators Network to work for a more just, fraternal and peaceful world through legislative processes that promote the good of all and address situations of inequality in society.

Pope Francis met Thursday with participants at a meeting promoted by the International Catholic Legislators Network.

In his prepared address, he greeted the organizers and those present for the event, thanking in particular Cardinal Christoph Schonborn and Dr. Alting von Geusau for their words of greeting. He also acknowledged the presence of Ignatius Aphrem II, patriarch of the Syriac Orthodox Church.

The Pope then offered his reflections on three keywords: justice, fraternity and peace.

He said he hopes these three themes can guide the discussions of the meeting that is being held to consider the important theme of advancing justice and peace in the current geopolitical situation, marked by conflicts and division which affects many areas of the world.

The first word – justice, said the Pope, is defined “as the will to give to each person what is his or her due”, though, according to the Biblical tradition, it also involves “concrete actions aimed at fostering right relationships with God and with others, so that the good of individuals as well as the community can flourish.”

In our world where many people cry out for justice, particularly the vulnerable who look to civil and political authorities to protect their fundamental human rights through effective public policy and legislation, the Holy Father reminded the lawmakers of their duties.

“Yours is the challenge of working to safeguard and enhance within the public sphere those right relationships that allow each person to be treated with the respect, and indeed the love, that is due to him or her,” said the Pope.

Here, the Pope extended his thoughts toward the poor, migrants and refugees, the sick and elderly, victims of human trafficking and those “who risk being exploited or discarded by today’s throw-away culture.” (Vatican media photo) 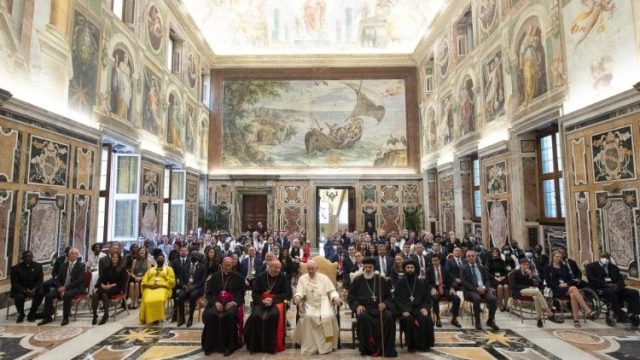 “A just society cannot exist without the bond of fraternity – without a sense of shared responsibility and concern for the integral development and well-being of each member of our human family,” Pope Francis stressed.

For this reason, a global community of fraternity based on the practice of social friendship “calls for a better kind of politics, one truly at the service of the common good.”

So, in order to heal the world from rivalries and violence that result from a desire to dominate rather than serve, we need not only responsible citizens but also “capable leaders inspired by a fraternal love directed especially towards those in the most precarious conditions of life.”

In this regard, the Pope encouraged ongoing efforts on national and international levels for work for the adoption of policies and laws “that seek to address, in a spirit of solidarity, the many situations of inequality and injustice threatening the social fabric and the inherent dignity of all people.”

Pope Francis then went on to add that the effort to build our common future demands the constant search for peace.

Peace, he added, “is not merely the absence of war”. Rather, the path to lasting peace calls for cooperation, especially on the part of those charged with greater responsibility, in pursuing goals that benefit everyone.

He further explained that peace results from an “enduring commitment to mutual dialogue, a patient search for the truth and the willingness to place the authentic good of the community before personal advantage.”

To achieve this, the Pope highlighted the importance of lawmakers and political leaders, noting that true peace can only be obtained through far-sighted political processes and legislation in order to build a social order founded on universal fraternity and justice for all.

Concluding, the Holy Father prayed that the Lord enable the Catholic legislators to become “a leaven for the renewal of civil and political life and witnesses of political love for those most in need.”

He further prayed that their zeal for justice and peace, nourished by a spirit of fraternal solidarity, continue to guide them “in the noble pursuit of contributing to the advancement of God’s kingdom in our world.”

If you read only one thing today (other than Joan’s Rome!), it should be this: Cardinal Pell Has One Question for Cardinal Becciu: ‘Will He Just Tell Us What the Money Was Sent for?’| National Catholic Register (ncregister.com)

And if you read only one of the follow stories, make sure it is the one about Michael Haddad and a papal book going to the North Pole!

POPE RECEIVES ITALIAN PRESIDENT MATTARELLA: The President of the Italian Republic, Sergio Mattarella, was received by Pope Francis in the Vatican’s Apostolic Palace, as his mandate draws to a close. According to the Italian Constitution, the President is the Head of State and represents national unity. It is his responsibility to make sure that Italian politics comply with the Constitution. His role is incompatible with any other office, and his term lasts seven years. Pope receives outgoing President Mattarella of Italy – Vatican News

POPE FRANCIS ESTABLISHES FRATELLI TUTTI FOUNDATION: “To support and design pathways of art and faith… to invest in cultural and spiritual formation through events, experiences, pathways and spiritual exercises… to promote dialogue with cultures and other religions on the themes of the Pontiff’s latest encyclicals, in order to build a ‘social alliance.’”: These are the aims of the new Fratelli tutti  Foundation, established by Pope Francis with a chirograph (a papal decree) signed on 8 December 2021. Pope Francis establishes Fratelli tutti Foundation – Vatican News

SAN GENNARO’S BLOOD FAILS TO LIQUEFY: (CNA) – The blood of St. Januarius, patron of the Italian city of Naples, remained solid on Thursday morning, so far failing to liquefy in December for the second consecutive year. The liquefaction traditionally happens at least three times a year: Sept. 19, the saint’s feast day, the first Saturday of May, and Dec. 16, the anniversary of the 1631 eruption of Mount Vesuvius. San Gennaro’s blood fails to liquefy at start of December anniversary | Catholic News Agency

An upcoming event at the Italian Embassy to the Holy See will present Michael Haddad, set to travel to the Arctic Circle with the help of an exoskeleton and a book blessed by Pope Francis to accompany him on his journey across the globe.

Pope Francis’ message of hope reaches the North Pole in an unprecedented journey. This is how the Vatican’s Dicastery for Communication introduces the upcoming journey of Michael Haddad from Lebanon, who is setting out to reach the Arctic Circle.

“Hope is bold, it knows how to look beyond personal comfort, the small securities and compensations that narrow the horizon, to open up to great ideals that make life more beautiful and dignified,” says the Pope in Fratelli tutti.

Seventy-five percent of Michael’s body was left paralyzed after a jet-ski accident when he was only 6 years old. Since then he has lost 75% of his motor functions and moves with the help of an exoskeleton.

Michael is a professional athlete and UN goodwill ambassador for environmental issues.

He has climbed mountains and crossed deserts, and has also participated in two marathons: one in Cairo, the other in Beirut, in his native Lebanon, to raise funds for the reconstruction of the hospital devastated by the explosion at the port in August 2020.

A statement released by the dicastery on Thursday explains that Michael Haddad is setting out to walk 100km (62 miles) in the North Pole, carrying with him a copy of the book “Why Are You Afraid, Have You No Faith?”, produced in a special edition by the Holy See’s Dicastery for Communication.

This book will be slightly different from all the other copies as it will have been blessed by Pope Francis, enabling Michael to carry the Holy Father’s message with him across the world.

“At the end of the walk Haddad will leave the small six-by-eight centimetre (2.4 by 3 inches) book in the Svalbard seed bunker, the largest and safest in the world, located in Norway, 1300 kilometres beyond the Arctic Circle,” reads the statement.

Haddad, who is a symbol of hope and faith and whose message focuses on the need for urgent action on climate change, care for our common home and inclusion in the face of inequality, “will show his commitment by receiving the message at a meeting at the Italian Embassy to the Holy See” on Friday.

In this way, says the statement, for the first time, “a message from Pope Francis will reach the North Pole hand in hand with an ambassador of goodwill and, like a seed of hope, will remain for posterity in the world’s largest and safest refuge dedicated to safeguarding the planet’s biodiversity.”

Friday’s meeting is co-organized by UNDP (United Nations Development Program), the Italian Embassy to the Holy See, the Institute for Global Dialogue and Culture of Encounter, with the participation of the Holy See Dicastery for Communication. It will take place on Friday, December 17, at 11.00 am at the Italian Embassy in Rome.