I attended the funeral Mass this morning in St. Peter’s Basilica for the late, much- loved and respected Slovak Cardinal Jozef Tomko. I have been in Rome long enough, including the years I worked at the Vatican, to see many of the great men who loved and tirelessly served the Church and the Roman Curia for many years go on to their eternal reward.

Cardinals such as Roger Etchegaray, Bernardin Gantin and Jean-Louis Tauran, to name only two. I’d have to name even John Joseph Wright who died in August 1979, the first American ever to head a congregation in the Roman Curia, whose secretary I was for four years.

As you will see in my slideshow of photos, I was just rows behind Pope Francis who was seated in an armchair. He had been brought into the basilica in his wheelchair through what is known as the Prayer Door and Diplomat’s Door, the same door I used earlier to enter the basilica. This entrance to St. Peter’s is just across a small square from the Santa Marta residence.

When I arrived at 10:30, a half hour before Mass, the funeral car was at the basilica entrance, guarded by two Swiss Guards and two Vatican gendarmes and a Gentleman of His Holiness.

I was brought up very close to the front of the left section of pews at the Altar of the Chair. Part of the right side of pews is reserved for members of the Diplomatic Corps accredited to the Vatican. A choir had been singing at the altar and a bishop was leading prayers as I sat down.

Dozens of cardinals and bishops, including prelates from Eastern rites, processed into the sanctuary for the funeral mass. Cardinal Tomko’s casket was in front of the altar. He will be buried in his native Slovakia.

Cardinal Giovanni Battista Re, dean of the College of Cardinals, presided at Mass and gave a perfectly beautiful homily, describing the cardinal to a tee. I was very moved as I thought of the times I had met Cardinal Tomko over the years, most of them very brief encounters, often just a casual meeting as I was out on an errand he was out on a walk.

One meeting does stand out. I was at a reception in 1995, shortly before my departure on the Vatican delegation to Beijing for the U.S. conference on Women. As we chatted, I told the cardinal that I was on the Vatican delegation to China and very excited about the upcoming trip. He took my hand and said, with a broad smile on his face, “Signora, if you need someone to carry your luggage, you know where to find me!”

I knew he yearned to get to China but he well knew conditions were not optimal for the visit of such a high-ranking person from the Vatican. He wished me well – the entire delegation, in fact – and said I should rest assured he would pray daily for us.

I had two meetings at the end of Mass.

Polish Dominican Fr. Wojciech Giertych, theologian of the Papal Household, after speaking to two Missionaries of Charity, spotted me and came over to shake my hand, saying “You are with EWTN, right? I just had a great interview with your Fr. Mitch Pacwa!” We spoke briefly after that and then I went to greet some nuns. 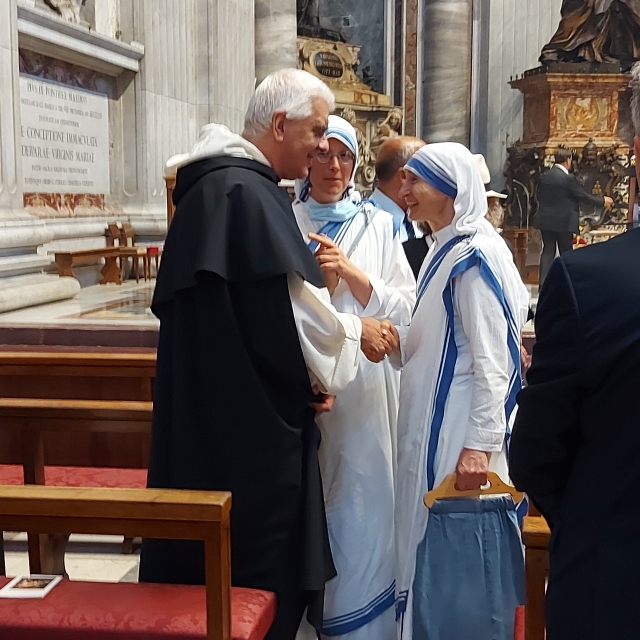 I wanted to thank the Sisters of St. Vincent de Paul for their loving care of Cardinal Tomko for years. Seems a number of people had the same idea. I did speak with one of the sisters and both of us got a little emotional at the same time. I thanked her and she gave me a big hug and asked what my name was. I said Joan, Giovanna in Italian. She said that was her name as well and gave me another hug!

It was a sad but also a beautiful morning. I was in the basilica for about two and half hours, attending Mass, then saying a rosary while waiting to go to confession.

I always feel so peaceful in St. Peter’s. There is something that is so calming for me as I sit at a favorite chapel or say a rosary or go to Mass or confession or just ponder beauty. The majesty of this basilica is no longer intimidating, it is inspiring.

CARDINAL JOZEF TOMKO: A PROLIFIC LIFE IN SERVICE TO GOD, THE CHURCH, MANKIND

Cardinal Giovanni Battista Re celebrated the funeral Mass for the late Cardinal Jozef Tomko, and recalled the faithful and fruitful service to the Church and the Pope by the former prefect of the Congregation for the Evangelization of Peoples.

Pope Francis, on Thursday morning, participated privately at the funeral Mass of the late Cardinal Jozef Tomko, celebrated at the Altar of the Chair in St. Peter’s Basilica in the Vatican. He presided over the funeral rites of Commendatio and Valedictio for the late Slovakian Cardinal. (Vatican photo)

Cardinal Jozef Tomko died on August 8 in his apartment in Rome at the age of 98. He was created a cardinal in 1985 by Pope John Paul II and was the prefect emeritus of the Congregation for the Evangelization of Peoples.

Cardinal Giovanni Battista Re, the Dean of the College of Cardinals, presided over the Mass.

A life of service
In his homily, Cardinal Re recalled that the long and intense life of Cardinal Tomko was consecrated to the service of God and of his brothers and sisters and dedicated to service in the Roman Curia.

This service, Cardinal Re continued, was carried out with a great balance in judgments, calmness, good sense, amiability and the finesse of his traits, always with the sense of the dedication to the “call to serve.”

After being unable to return to the archdiocese of Kosice in his home country of Slovakia* due to the communist government’s opposition to the Catholic Church, Tomko was ordained a priest in Rome in 1949 and was hired at the Congregation of the Holy Office in 1962.

His service to the Roman Curia continued as the undersecretary of the Congregation for Bishops in 1974, and then appointed by Pope John Paul II as secretary general of the Synod of Bishops in 1979 where his understanding and knowledge of the universal Church grew.

In 1985, he was appointed prefect of the Congregation for the Evangelization of Peoples and became cardinal soon afterwards.

In his homily, Cardinal Re said Tomko’s prolific life embodied the great missionary and apostolic spirit.

His work was dedicated to the creation of numerous new dioceses, the construction of new churches, education centres, social centres, and the development of the missionary cooperation of the Pontifical Mission Societies in many countries, while “always putting Christ at the center in his interventions and manifesting great spirit of openness to peoples, their cultures, their traditions, and sense of universality.”

His legacy of service and love for others, Cardinal Re affirmed, serves as a model for us “to complete our earthly journey in unswerving fidelity and in a never-failing momentum of service to the Church and our brothers and sisters, to which Cardinal Tomko left us edifying testimony.”

*at the time Tomko came to Rome, the country was Czechoslovakia