Today, Thursday March 19 is a big day at the Vatican with many reasons for celebrating, and it is also a holiday, a day off for staff!

March 19 is the feast of St. Joseph, declared patron of the Universal Church in 1870 by Pope Pius IX, it is the onomastico or “name day” of Pope emeritus Benedict XVI, né Joseph Ratzinger, it is Father’s Day in Italy and today in particular marks the second anniversary of the official start, the inaugural Mass, of the pontificate of Pope Francis.

At that inaugural Mass, Pope Francis focused his homily on St. Joseph on his feast day: “How does Joseph respond to his calling to be the protector of Mary, Jesus and the Church? Pope Francis asked. “By being constantly attentive to God, open to the signs of God’s presence and receptive to God’s plans, and not simply to his own. nJoseph is a ‘protector’ because he is able to hear God’s voice and be guided by His will; and for this reason he is all the more sensitive to the persons entrusted to his safekeeping. He can look at things realistically, he is in touch with his surroundings, he can make truly wise decisions.”

Pope Francis, as he has done in the past, called his predecessor to wish him a happy feast day. (Osservatore Romano) 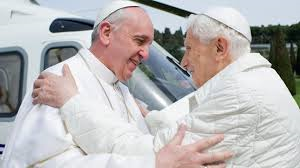 I have been blessed to have met both Francis and Benedict XVI on a number of occasions and even, on one special day 17 months ago, a day that perhaps only a handful of human beings have ever experienced, I met both of them within hours of each other – a story I shall tell some day!

This was in the early years of Benedict XVI’s papacy, in the library of the Apostolic Palace after the Pope received a head of State. I was in the pool of journalists covering the event. (Osservatore Romano photographger) 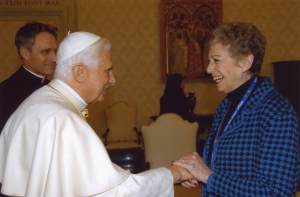 And this was taken on September 5, 2014 when I joined 22 parishioners from Santa Susanna, our rector and vice rector at morning Mass with Pope Francis in the chapel of the Santa Marta residence. (Osservatore Romano photographer)

A PRAYER TO ST. JOSEPH

In the presence of Joseph, it is easy to engage in confident prayer. The following words, among the many that are possible, are those of a father about this righteous man, Mary’s spouse, who was able to hear the voice of angels and incline to God’s will.

This time a father is speaking out in prayer to You, on the feast day of Joseph, the righteous father, the solid beam of the house in Nazareth, Mary’s husband, the virgin father of Jesus, Your Son. How difficult is the prayer of fathers! It is rare, poor and hardly visible. For fathers, just a glance up to heaven, a restrained sigh or an accentuated wrinkle are often enough. However, fathers also pray, asking and waiting; and my prayer is for others: for the children, first of all, for the loved ones at home, and for my own wife who is not only a mother.

Before saying what a father may ask, Lord, I place myself next to Joseph. Like him, I—as a father—would like to learn to recognize the faint traces of the angels; to believe the Word brought by the announcement; to keep it close, simply to obey. Like Joseph, marital love is enough to make me believe in the mystery of life entrusted to weak flesh and toilsome hands; it is enough to make me resist against Herod’s threats, to protect life, in active silence.

Lord, even the fathers experience desolation, like Joseph, when he thought of sending Mary away and yet supported her like a rock, because he trusted You and You came to comfort him as he slept. Lord, give me Joseph’s faith, and come to visit me too visit in my nights; give me the courage not to be afraid of life and to accept all that comes from You.

Saint Joseph, may you be blessed; stay close to me. And, with you, may the Virgin Mother and the Son of the Most High also be at my side. AMEN

(Vatican Radio) Pope Francis sent a telegram offering prayers for the victims of Wednesday’s terror attack in Tunis, in which at least 23 people were killed and more than 40 others wounded, many among them foreign tourists. In the telegram, signed by the Cardinal Secretary of State Pietro Parolin and addressed to Archbishop Ilario Antoniazzi of Tunis, the Holy Father decries the attack as, “[An act] against peace and the sacredness of human life.” He goes on to assure the families of the victims, all those affected by the incident, and the whole Tunisian people, of his continued prayers.

The Pope’s condemnation and condolences came after remarks from Cardinal Parolin who told Vatican Radio, “[The attack was] something most cruel and inhuman, truly unthinkable: to be condemned in the strongest possible terms.” Cardinal Parolin went on to say, “We must hope that, in the name of God, no more violence is committed.”

Tunisia has suffered violence at the hands of Islamic militants in the past, and a disproportionately large number of Tunisians have joined the so-called “Islamic State” in Syria and Iraq. Tunisian security forces are currently battling Islamic militants belonging to several groups, including Ansar al Sharia, which the U.S. lists as a terrorist group, and an al Qaeda affiliate with fighters operating along the Algerian border.

Speaking on national television in the wake of the attack, Tunisia’s President, Beji Caid Essebsi, said his country would not be intimidated. “These monstrous minorities do not frighten us,” he said.

Tour operators have already begun to react to the incident, with Italian cruise company Costa announcing it will be suspending calls to Tunisian ports. Tourism accounts for nearly 10% of the Tunisian economy, which is still struggling to steady itself along with the whole of Tunisian society, in the wake of a democratic reform movement that led to the ouster of the country’s long-time ruler at the start of what came to be known as the Arab Spring.